TV review: With constant flashbacks and a labyrinthine storyline, it’s a sweltering muddle 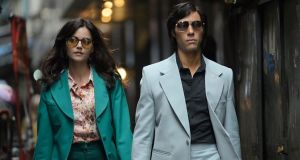 Marie-Andree Leclerc and Tahar Rahim in The Serpent

Tangled up somewhere inside The Serpent (BBC One, 9pm) a compelling true crime drama is trying to slither free. Alas, the BBC’s big new year drama loses its way as it seeks to weave a gripping thriller out of the sordid and often convoluted crimes of 1970s backpacker serial killer Charle Sobhraj.

A charming sociopath, Sobhraj (Tahar Rahim) left a string of bodies along the hippy trail winding through Thailand and Nepal. The problem with The Serpent is that it is torn between the instinct to mythologise Sobhraj - which would have made for better drama - and to acknowledge that this was a real killer with real victims.

What ends up on screen is a sweltering muddle. With an oppressive orange haze hanging over almost every scene, 1970s Bangkok is impressively evoked. Yet constant flashbacks and a labyrinthine storyline makes for an unsatisfying viewing experience.

The Serpent doubled as a whodunnit in episodes one and two as plucky diplomat Herman Knippenberg (Billy Howle) investigated the suspicious disappearance of two Dutch backpackers (among Sobhraj’s earliest victims). The focus in episode three is Dominique Rennelleau (Fabien Frankel), a real life French tourist seduced by Sobhraj (who introduces himself as “Alain”) and his pledges of friendship.

“Alain” has soon entangled Dominique in the same web in which he ensnared the Dutch couple. The newcomer is drugged, and invited to see out his “recovery” (from a non-existent malady) in the care of Sobhraj and his girlfriend/enabler Marie-Andrée Leclerc (Jenna Coleman, here to impress us with her Quebecois accent).

Sobhraj is a world-class gaslighter, encouraging Dominique to believe that his new friend is the only one who can help him with his illness. When Dominique realises he’s being taken for a mug, Sobhraj admits that he’s been using the Frenchman’s doctored passport - but insists that he needn’t worry and that everything will be sorted out.

That’s a lie. And when Sobhraj and Leclerc leave for Hong Kong, Dominique takes advantage of the opportunity and flees to Paris. We’re supposed to be on tenterhooks as he boards his flight (Sobhraj claims that because Dominique’s tourist visa has expired he will be unable to depart Thailand). This is interposed with an interview between Knippenberg and Nadine Gires (Mathilde Warnier) a Frenchwoman who has also fallen under Sobhraj’s spell yet who helps Dominique escape.

That distinctive 1970s mixture of fading idealism, early onset nihilism and aesthetic naffness - from the cars to the sunglasses and the wallpaper, this world is a symphony of ugliness - is powerfully conjured.

However, Sobhraj is such a slippery character that, even under full glare of a prestige thriller, he remains inscrutable. He led police forces on a merry dance for decades. And here again, he proves frustratingly elusive - a blank void at the centre of a drama that, without him, feels empty.