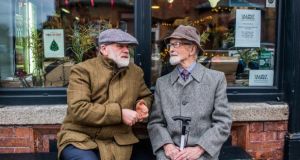 Several lifetimes of empathy and tenderness are bound up in Let the Rest of the World Go By (RTÉ One, 9.35pm), Donal Moloney and Patricia Murphy’s heartfelt profile of Matt Murphy and Michael O’Sullivan, the romantically uninvolved men who married in 2018 to avoid inheritance tax.

The film goes beyond merely rehashing the relatively widely known facts of the case to paint a fascinating portrait of two individuals who, adrift in a cruel world, found in each other something to cling to. Moloney and Murphy also delve into the Downton Abbeyesque origin story of Matt Murphy, who died in January 2020 at the age of 84.

In so doing, they stumble upon another Ireland: a strange place within touching distance in a temporal sense but in other ways impossibly far away. It’s an eccentric, sob-inducing roller coaster.

After they announced their betrothal on Liveline, O’Sullivan was accused of trying to take advantage of the frail Murphy

The quietness of it all is what really holds the attention. The documentary recounts how Murphy and Sullivan took advantage of marriage-equality laws so that the former could bequeath to the latter his house in Stoneybatter in Dublin while avoiding a €50,000 tax bill. And we are reminded of the degree to which the tale – strange but sweet – captured imaginations around the world.

Yet it was in its small, peaceful moments that the Let the Rest of the World Go By truly spreads its wings. We see O’Sullivan lead Murphy on walks in the woods and trips to the strand. They sit on benches, hug trees, drinking in the stillness. In bed at night they are a real-life Ernie and Bert. Murphy winces as O’Sullivan roars at the soccer on TV.

O’Sullivan was a divorced father and actor who had become homeless and was sleeping in his car when he reconnected with his old friend. Murphy cuts a more elusive figure. He had been born in the lodge of a big house in Tipperary, and questions marks hung over the identify of his father. One rumour was that he was the lovechild of one of the aristocrats who owned the pile. “Pure speculation,” says a friend of the family.

After they announced their betrothal on Liveline, Joe Duffy’s show on RTÉ Radio 1, O’Sullivan was accused of trying to take advantage of the frail Murphy – claims that understandably filled him with anger. They occasionally got on each other’s nerves, too: Murphy despaired of O’Sullivan’s lack interest in home decor; O’Sullivan grew to hate Murphy’s tendency to gossip.

“I was born ahead of my time. I wanted to wear bright colours, go out in outlandish things,” says Murphy of his early life as a butler in Tipperary, where he would dress as a glamorous jazz-age flapper. That hunger to push boundaries did not extend to exploring the great world beyond. He ventured out there just once when taking a cruise trip to Australia. The male companion who had offered him the complimentary ticket tried to consummate the relationship. O’Sullivan high-tailed it back to Ireland.

Let the Rest of the World Go By is difficult to watch in places. A year after the nuptials, Murphy began to display signs of dementia. If you’ve lost someone to the condition, you will recognise the signs – the chilling flights of whimsy, the subtle yet always irreparable dislocation of personality. He died two months before Covid-19 struck.

This makes for a melancholy conclusion. But it’s the warmth that stays with you. Let the Rest of the World Go By is at its core a tribute to and argument for human decency. “It’s not how rich, how clever, how skilled or how beautiful you are: it’s how you treat other people,” says O’Sullivan. “Matt is a master at that.”