Colin Stafford-Johnson, documentary maker and nature lover, is coming to a theatre near you 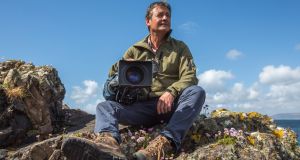 Colin Stafford-Johnson: “Since I left school 30 years ago, Ireland has fundamentally changed. The ecology in much of rural Ireland is totally destroyed. That’s the reality.” Photograph: Matt Loughrey

Colin Stafford-Johnson sits in the lobby of the Radisson Blu hotel in Dublin 8, looking as relaxed as he does when he’s sitting in a currach on the telly, paddling up Ireland’s Atlantic coast.

Last month, the series in which he did just that – Wild Ireland: The Edge of The World – was nominated for an award at one of the world’s top wildlife film festivals, Jackson Hole in Wyoming. “We were beaten by Sir David,” he says, with a smile and a gentle shrug. “What can you do?”

In the world of wildlife documentary making, if you’re in the same competition as David Attenborough you’re doing pretty well. These days, Stafford-Johnson is moving into ever more exalted telly territory. Next year he’ll be filming the North American section of a new BBC series, First Year on Earth, in which he will track the first 12 months of a black bear cub and a sea otter pup.

Before that, however, he’s hitting the road with a 15-venue live tour of Ireland, bringing tales of his wildlife travels to theatres around the country. “It’s a bit daunting,” he says. “But I’m looking forward to it. I like meeting people.”

Stafford-Johnson grew up in Cabinteely, Co Dublin – which isn’t, I suggest, very wild at all. “Ah, but you see, it was then,” he declares. His father, Barney Johnson, was Ireland’s first TV gardener, and their house and garden centre backed on to an area of unspoiled marsh and river. “My brothers and I used to spend our time catching minnows and frogs and newts. We had barn owls there in those days.”

When the family acquired a cottage in Wicklow, his world opened up into wildness. “The whole place was overgrown. My brothers and I made our way through the weeds and I’ll never forget the feeling of opening the old wooden gate, which we had to force because it hadn’t been opened in a long time. Outside that gate was the Devil’s Glen – and that was our playground. In all the years we were there, we hardly met a single soul.”

When he finished school, Stafford-Johnson signed up for a general science degree at Maynooth. In the pub one night, a wildlife documentary – David Attenborough’s Living Planet, as it happens – came on the telly. “I thought, ‘What am I doing here?’ I was 19.”

He quit college and backpacked around the world – crossing New Guinea on foot and working in a goldmine in Tasmania, among other adventures – before going to the UK to study biological imaging.

When he got the chance to go to India to film tigers for the BBC’s Natural World strand, Stafford-Johnson seemed to be heading for a successful career as a cameraman. Were it not for two Irish independent producers – Gillian Marsh, of gmarshtv, and John Murray of Crossing the Line films – both of whom spotted his potential as a presenter, he might never have switched to the other side of the lens.

He has worked closely with both companies ever since, and insists the success of Living the Wildlife, which ran for eight consecutive seasons on RTÉ, and Ireland’s Wild River: The Mighty Shannon, which took the top prizes at both Jackson Hole and its UK equivalent, Wildscreen, two years ago, is down to the talents of their respective production and editing teams.

But Stafford-Johnson’s understated presenting style, and his poetic way with words, also play a key role in establishing the distinctive tone of these particular films.

Unless they break the surface, you’d never know they were there

When it all comes together it makes for some unforgettable sequences. A kingfisher dive-bombing into a river. Wide-angle shots of starling murmurations. Or the scene in Wild Ireland in which Stafford-Johnson sits calmly in his currach while blue sharks circle – equally calmly – beneath. “Unless they break the surface, you’d never know they were there,” he says.

What are his must-see Irish wildlife experiences? “If you’ve never seen a basking shark, you definitely need to do that. And we’ve got lots of humpback whales, fin whales, minkes. The Irish Whale and Dolphin Group have a great website where you can find out what’s going on.”

For many of us, Dalkey Island might be a more accessible option. “Go swimming with the seals. It’s like the Galapagos, ” he says. “You’ve seals lying on top of you, particularly the younger ones – they just literally come up to you and hold you. And you’re floating out in Dublin Bay holding on to a seal. It’s as cool a wildlife experience as you’ll get anywhere.”

Stafford-Johnson isn’t a man for polemic – still, he gets distressed by the unavoidable topics of habitat loss and climate change. “Since I left school 30 years ago, Ireland has fundamentally changed. The ecology in much of rural Ireland is totally destroyed. That’s the reality,” he says.

“Drive across Ireland on a July night and you don’t have to wipe an insect off your windscreen. If you had done that drive in the ’70s, you’d almost have to get out and clean your windscreen halfway.”

The good: “The rainforest canopy at dawn – maybe in the Amazon – where you’re watching the sun come up and you’ve got troupes of scarlet macaws screeching over your head, and monkeys in the trees with you, and no sight of man anywhere.”
The bad: “In India, I was out for a walk in a national park where I was working. I was wandering up a dry riverbed when suddenly I heard this sound. I thought, ‘Oh, crikey’ – and this tiger came barrelling at me. It was just a dummy charge and it was over in a couple of seconds, but my entire body had to process feelings I had never felt before.”
The ugly: “We have to be careful in making wildlife documentaries. They can be guilty of painting a much too rosy picture of what’s out there. If you go to, say, Borneo and all you show is deepest darkest rainforest and nothing else, you’re giving a false impression.”