Fantastic Irish winter birds and where to find them 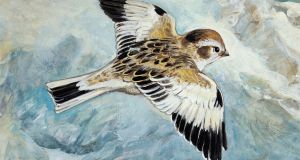 It’s natural to think of winter in Ireland as the season when nature pulls down the blinds. Light fades, leaves fall, vegetation withers and swallows fly south. Natural, but quite wrong for birds. This is the time of maximum abundance for waterfowl – swans, geese and ducks – and spectacular wading birds like curlew and sandpipers.

And these species are remarkably easy to see at almost any estuary, often very near our cities. You can see both wildfowl and waders in very large numbers at the North Bull Island in Dublin, for example, and from half a dozen sites in the Cork Harbour area.

Winter is also the time when some of our largest and most dramatic birds of prey roost together in quite large numbers, sometimes with elaborate pre-roosting flight displays, or are more easily spotted while hunting than in the summer.

Meanwhile, though most of our breeding warblers have now migrated from deciduous forests, the many remaining birds are much easier to spot among the bare trees, and their numbers are often boosted by winter visitors from northern Europe.

And, as Fionnuala Fallon has recently pointed out on these pages, a good set of garden feeders may attract unfamiliar birds where you can see them up close.

Here is a brief guide to 10 remarkable winter birds, and where you are likely to find them.

Seamus Heaney doesn’t say which species he is writing about in his luminous poem Postscript, but its lines perfectly capture the dramatic arrival (from Iceland) of this majestic winter visitor:

“The surface of a slate-grey lake is lit
By the earthed lightening of a flock of swans.”

Whoopers can turn up anywhere near water, from coastal wetlands in Kerry to Offaly bogs to Louth’s green meadows. The yellow on their bills distinguishes them from the black-knobbed orange bill of the much more common mute swan, as does their trumpeting call.

Ducks (or rather drakes) sport their freshest breeding plumage in October, and the male pintail embodies discreet elegance. It has a dark chocolate head with a distinctive vertical white stripe running up from the breast, several subtle shades of grey on wings and flanks, and splashes of yellow and jet black low down towards the rear. Yet its glory is its long and needle-thin black tail, often angled upwards at 45 degrees. Find individual pairs scattered among much larger flocks of wigeon and teal on wetlands.

Curlew (and waders in general)

The curlew, with its large size, long curved bill, and poignant call, is the easiest wading bird to recognise. But there is great pleasure to be had in spending some time in the company of waders even if you can’t distinguish between them. On coastal wetlands seek them three hours before high tide; the birds are driven slowly towards observers on land in ever-denser flocks. They will finally explode into flight, creating interlocking kinetic aerial ballets of diverse species, setting the sky vibrating with their cries.

These geese, so at ease around people on your busy local sports pitch in midwinter, were raised on remote Canadian tundra where few humans set foot. This is the ubiquitous goose of Irish estuaries, from Strangford Lough to Tralee and Galway bays. Its plumage is “grubbier”, more smudged and less distinct, than our other dark geese. By midwinter, or even earlier, it exhausts its aquatic food supply, and grazes more and more frequently on urban parks and sports pitches.

This magnificent bird of prey was long extinct in Ireland, and only recently reintroduced, especially in Wicklow. One of Ireland’s great winter bird spectacles now often occurs over the Avoca village bridge an hour before sunset. A dozen kites may be seen at a time. They weave around each other in social flight displays before roosting, sometimes all in a single tree. Their rusty-red and ermine-grey plumage shimmers as their sharply-angled wings and long forked tails propel them lazily through the evening light.

This big bird of prey is severely threatened on its upland breeding grounds by habitat loss. In winter it is easier to find, frequenting wetlands like Dublin’s Rogerstown, Wexford’s Tacumshin, and the margins of Lough Corrib. The female is brown and bulkier than the slimline silver-grey male. Both have distinctive white rumps. They fly low, “quartering” reedbeds, back and forth, side to side, systematically hunting prey. They also may roost collectively, but please don’t disturb roosts: report them to the National Parks and Wildlife Service.

For centuries it seemed that, along with snakes, woodpeckers had been banished from Ireland. They are such a marvellous and familiar feature of woodlands almost everywhere that their absence here was palpable. And then 10 years ago this species recolonised Wicklow, and is expanding. For a colourful bird they are surprisingly hard to find for most of the year, but in winter they just might come to your bird feeder. In early spring their courtship “drumming” on leaf-bare tree trunks gives them away.

The siskin is not as common as the similar bigger greenfinch. Yet it is still quite abundant, though much less familiar to most people. This is partly because it spends a lot of its time feeding on cones in spruce and pine plantations and because it doesn’t show off so noisily. However, hard weather often drives it to garden feeders in winter. It is an altogether neater bird than the greenfinch, its yellow plumage much more vivid, contrasting with blackish patches on wings and head.

American poet Leonard Nathan wrote that he found, in this sparrow-sized bird’s plumage, “an eloquence that goes beyond biological purpose, a superfluous beauty”. He was probably talking about the male’s dapper summer outfit; the bunting’s winter dress, the only one we see here, is rather non-descript. Yet it is often strikingly whiter, especially in flight, than any of our small perching birds. It is almost entirely coastal here, and can turn up in odd places like the end of Dún Laoghaire pier.

This is probably the rarest bird on our list but also among the most abundant at certain moments. It is certainly one of the most quirkily attractive There are winters when very few waxwings turn up. There are others when they “irrupt” from northern Europe, and then 50 of them may flock very visibly through a single suburb’s gardens. They love berries, especially cotoneaster. Their tufty crest, black mask and bib, and wings and tail dipped in vivid yellow all make them unmistakable.