The life of an Irish wildlife ranger

A ranger’s lot: From snails to bogs, and threats from poachers and turf-cutters 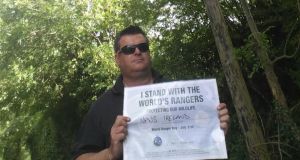 Wildlife ranger Lorcan Scott is responsible for more than 50 raised bogs in the east and south of Ireland.

What do you think of when you hear the words wildlife ranger? A man in a flak jacket with binoculars and a camera slung across his shoulders and a gun? Well, that might be accurate in countries where wildlife rangers are a kind of police force protecting the natural world from illegal loggers and animal poachers. But, in Ireland, a wildlife ranger’s job is a lot tamer, yet not without responsibility for monitoring and enforcing wildlife legislation.

Lorcan Scott is a wildlife ranger with responsibility for more than 50 raised bogs in the east and south of Ireland. With colleagues in the National Parks and Wildlife Service (NPWS), he has recently revived the Rangers Association of Ireland (RAI) to bring rangers together and support families of rangers around the world who have been killed while working.

More than 100 wildlife rangers died around the world in 2018. Some were killed by illegal loggers, some by poachers, others by insurgents in war-torn parts of Africa and others in accidents while on patrol. The International Ranger Federation (IRF) names all these rangers in an annual ranger roll of honour.

Scott says that while Irish wildlife rangers don’t face the same threats as colleagues in Africa and Asia, there have been a few incidents where wildlife rangers in Ireland were threatened by deer poachers and illegal turf-cutters.

“Most wildlife rangers work on their own, which is why we are re-forming the Rangers Association of Ireland. We want to connect rangers with each other,” says Scott. There are about 80 wildlife rangers employed by the National Parks and Wildlife Services but the reformed RAI is keen for other wildlife rangers, guides, biodiversity officers and heritage officers to join them to share experiences and knowledge.

Lorcan Scott is also keen for Irish wildlife rangers to support the work of the International Ranger Federation. This organisation, which was founded in 1992, organised an annual World Ranger Day on July 31st to celebrate the work of wildlife rangers, and remember the rangers who died that year. The IRF also raises funds for the families of rangers killed in the line of duty through the Thin Green Line Foundation.

We meet on the boardwalk on Pollardstown Fen in Co Kildare. Scott has chosen the location of Ireland’s largest remaining spring-fed fen to talk about the work of wildlife rangers.

Readers may remember that in the late 1990s and early 2000s, a rare snail (vertigo angustiar) became the centre of much debate during the building of a bypass road through Kildare. Almost 20 years later, the snail and two other snail species (vertigo moulinsiana and vertigo geyeri) remain at critical levels in this special area of conservation.

“What people forget is that the snail is an indicator species for this important habitat. The environmental services of boglands include holding water and slowly discharging it into rivers and streams. If you take this away – you’ll get flooding in the winter and droughts in the summer,” explains Scott.

Pollardstown Fen is an accessible and very peaceful place to come to at any time of year. In the summer months, you can see rare orchids, butterflies, dragonflies and sedge grasses. In the winter months, it is home to migrating wildfowl.

Scott leads walks on the fen but, like other wildlife rangers, most of his work involves monitoring swathes of landscape for breaches in environmental legislation. He spends a lot of his time negotiating with (and sometimes bringing legal proceedings against) traditional turf-cutters who continue to defy the ban on cutting turf on these scientifically important boglands.

Wildlife rangers are also notified parties in planning applications and breaches that might affect designated nature reserves and special areas of conservation. “Campaigning work is not part of our brief but we say that conservation without rangers is just conversation,” he says.

David Lyons is a conservation ranger in southeast Clare which encompasses the Shannon river estuary. “My main responsibility is to monitor the designated sites on privately owned land from Killaloe to the Shannon estuary and the blanket bog in the mountains of east Clare,” says Lyons.

Lyons says that bringing cases to court is the most difficult part of his job. “There are ongoing court cases about hedge-cutting, bird traps and damage to special areas of conservation,” he explains.

With Galway-based wildlife ranger Ann Bingham, Lyons has piloted a junior ranger programme to educate primary school children about their local habitats. “Children have a huge knowledge about exotic wildlife but they don’t know so much about their local wildlife. We help them appreciate what’s on their doorstep by bringing them on field trips,” says Lyons. Plans are afoot to expand the programme from Clare into Galway in the autumn of 2018.

Gillian Stewart is a guide in the Wicklow Mountains National Park. “We’re responsible for the education side of things while the wildlife rangers are more like policemen protecting and enforcing wildlife legislation,” she says. Managing people and traffic is one of the biggest issues in Glendalough where thousands of visitors go in the summer months.

“Glendalough is the honey pot for the National Parks. It’s already a sacrificial lamb in terms of footfall on the landscape,” she adds. “Showing people nature is good but you’ve always got to weigh up conservation of wildlife and landscape against giving people access,” she adds.

An Garda Siochána is planning to start a new training course for gardaí in September to tackle wildlife criminals. Superintendent Martin Walker, who led successful operations against deer poachers in Leinster five years ago, says there is very low risk of being caught for poaching animals in Ireland yet the profits are quite strong. Prosecution under the 1976 Wildlife Act is also complicated.

Deer poachers are increasingly using infrared telescopic sights for night-time shooting in the mountains which means they can’t be spotted. Once they have killed and gutted the deer, poachers mark the location with GPS and return the next day to collect the deer carcasses without carrying weapons.

“Wildlife crime is worth €20 billion across Europe for criminal gangs and organisations,” says Supt Walker. “After drug importation, firearms and human trafficking, it is the highest income for criminal elements,” he adds.