‘I'm Adrian Chiles and I’m not an alcoholic’

TV presenter Adrian Chiles speaks to comedian Frank Skinner, himself sober for 30 years, about his relationship with alcohol in "Drinkers Like Me". Video: BBC 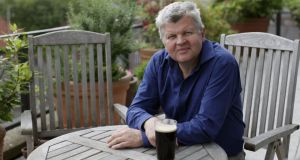 There are no strict criteria, but there are a few classic symptoms of alcoholism: Justifying your drinking because it helps you relax, sleep or feel better. Drinking alone, or in secret. Experiencing mood swings, blackouts or memory loss. To that list, perhaps, we may add one more symptom of undiagnosed problem drinking: making a documentary about it.

“I’m Adrian Chiles and I’m not an alcoholic,” begins the bluff BBC presenter of Drinkers Like Me (BBC One, Monday, 9pm) in this personal reflection on drinking and its consequences. How could he be, he wonders? Alcoholics see spiders crawling on the ceiling, sleep in doorways and wreak havoc.

“I’ve seen no spiders, I don’t really get drunk and I don’t misbehave.” Chiles, a stout and approachable figure, familiar from stints in breakfast television and sports broadcasting, has the kind of relationship with alcohol that many will recognise. He knows that his isn’t good, but at least it’s not as bad as other people’s.

Besides, British medical advice puts the recommended weekly limit at a stingy 14 units a week (which is the equivalent of seven pints, a bottle and a half of wine, or ten shots). On a bleary morning at home, he enters his tally into a drinking diary app from just the previous night. It is 32.4 units (or twice the recommended weekly limit with a couple more pints and a chaser for the road).

Throughout the programme, though, Chiles is fascinatingly imprecise with his units. Pints are invariable described as “a couple”. A couple can mean three or four. Or five. Early, he points out that the amount of alcohol purchased in the UK is double the amount people claim to drink. “So it looks like it’s not just me who’s been kidding himself.”

Like many nights out, the documentary begins jovially, then turns messy, then grimly repetitive, and finally concerning. Chiles visits a neuro-psycho-pharmacologist (“You really must cut down. You must”), a liver specialist (“You can’t carry on like this.”) and a therapist (“You’re already alcohol dependent.”). And, even though he will frankly admit to depression and anxiety, he still can’t quite confront his drinking. After that therapy session he ruefully admits he got “more drunk than I’ve been in a year, falling over when I got home”.

There’s nothing quite as torturous, for addicts and those around them, as a person who admits they have a problem and does nothing to address it. It’s fascinating to see Chiles have dinner with Frank Skinner, now sober for 30 years, and still dial down his own problem. “It’s nothing like yours was,” he tells Skinner, fretting to the camera later, “my level isn’t as low as he thinks it is.”

You can be forgiven for wondering if Chiles may be wrestling with another addiction – a camera dependency, which he invites into so many intimate, private spaces. Of all the good advice he receives, the considerate words of an addiction support group stand out, advising him; “You have to be aware and truthful about your thinking before you go in.”

Has Chiles undertaken the programme in that spirit, resigned finally to cut his drinking down to about twice the recommended limit, but unable or unwilling to stop? Then again, who are we to judge?