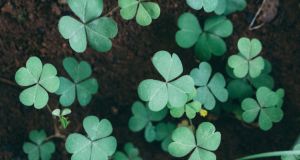 Writing about shamrock in the 1980s, the Irish botanist Charles Nelson said that shamrock was nothing more and nothing less than young clover

The three-leafed plant that is one of Ireland’s strongest national symbols is never more present than on St Patrick’s Day. It was reputedly used by St Patrick to explain the Christian three-in-one deity – God the father, God the Son and God the Holy Spirit. The three leaves of a shamrock are also said to stand for faith, hope and love, and a fourth leaf for luck. Religious beliefs aside, there is much dispute as to exactly which three-leafed plant is a shamrock. The species grown by commercial growers is usually a type of clover known as yellow clover. Other popular “shamrocks” are the young leaves of red and white clover and wood sorre.

Writing about shamrock in the 1980s, the Irish botanist Charles Nelson said that shamrock was nothing more and nothing less than young clover. The word shamrock comes from seamróg, the Irish name young clover. If you manage to keep some and get it to grow, you will see the clover flowers emerge later in the year. Although clovers are considered as weeds by gardeners, some farmers encourage their growth in pasture land because clover plants (with the help of bacteria living in their roots) can take nitrogen directly from the air and fix it into the soil, helping fertilise the land.