Hour-long audio drama is a love letter to 1950s noir, set in a dirty near-future cityscape 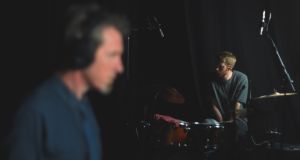 The Hands of Franky Machine is designed to be experienced in one continuous hour-long sitting, like a film or a play

Sometimes the compulsion to write a story comes from a riddle, a moral knot that can only be worked out within the hypothetical realm of a yarn. So it is with The Hands of Franky Machine, released this week as a sort of “movie for the ears”, a 60-minute audio drama written and narrated by myself, as Cursed Murphy, and scored by Basciville drummer and composer Lorcan Byrne.

The project’s origins go all the way back to the teenage years, when I taught myself to play drums and brazened my way into bands. I was never better than workmanlike as a musician, but playing gigs, even in the grimiest, stickiest venues, gave me a tiny taste of what athletes and artists call the “flow”, a condition somewhere between runner’s high and a really nice wine buzz.

But nine years in a succession of grungy guitar bands made it apparent that I wasn’t good enough, or lucky enough, to make it work as a profession. I had a young family and some hard decisions to make.

Quitting music was a tough one, but it forced me to write. Writing brought me work and it brought me luck. It saved my skin, no doubt, but at a price, and I sometimes wonder if that price wasn’t too high, or if maybe I should have tried harder to integrate music with the “straight” life instead of being so fundamentalist about it.

This notion followed me down the decades and eventually inspired the core question at the heart of The Hands of Franky Machine. The protagonist, Franky, is a veteran drum battler in her early 30s. She makes her living playing contests in the clubs: two drummers pitted against a metronome that gains in speed as the bout intensifies; the first one to drop the beat loses the bout.

Franky takes on all challengers. She’s Olympic level good, but her days as a battler are numbered. Her brother Sonny, a discharged army veteran, is addicted to a street drug named Metafetamine. Franky serves as his minder but also his enabler. In the wider world, a multimedia entity named Eurika has successfully lobbied to patent all existing musical notation – the ultimate pay-to-play – and its lawyers are sending legal threats.

Franky’s dilemma, the question that bothered me enough to write the story, is: what happens if your gift becomes a curse? What happens when the thing you were born to do becomes the thing that’s slowly killing you?

The Hands of Franky Machine is a love letter to 1950s noir, set in a dirty near-future cityscape. The protagonist’s nickname is a nod to Nelson Algren’s novel The Man With the Golden Arm, filmed by Otto Preminger and starring Frank Sinatra in one of his greatest roles. Sonny takes his name from James Baldwin’s short story Sonny’s Blues, published in 1957.

When I first conceived of the story back in 2013, much of the set-dressing – prosthetics, i-plants, android sex-workers – was still squarely in the realm of the speculative. When I finished it last year, it was real. The subplot involving Eurika’s algorithms, inspired by an online remark made by Cillian from Basciville, merged into stories of Cambridge Analytica and Spotify and Facebook’s choke-hold on the culture.

Sonny’s experiences in the veterans hospital were drawn from a 2007 interview I did with Henry Rollins about his experiences as a USO performer: two years ago I came across a YouTube clip of a bionic drummer, Jason Barnes, who had learned to play with a prosthetic limb after losing his arm in an electrical accident.

Franky and Sonny are holdouts, making a desperate stand in a hostile climate. Eurika is the end result of late-capitalist Big Tech. Even pre-Covid felt like musicians and live performers were being strangled by the tentacles of beaurocratic red tape, insurance premiums and absurd health and safety rules. And just as we were completing the final mix on the project, a culture war erupted over sexist comments made by a session player on the podcast A Drummer in Dublin.

Funded by a Covid-19 Crisis Response Award from the Arts Council of Ireland, The Hands of Franky Machine was recorded live in eight movements, vocals and drums together, with a minimum of overdubs, by Dan Comerford, in the National Opera House.

With the staff’s co-operation, we managed to turn the building’s Festival Room and the Jerome Hynes Theatre into a recording laboratory and performance space for 10 days in August. Numbers were restricted because of lockdown, so visitors to the sessions were few: second cameraman Tom Bates, journalist Sinead Furlong, artist and film-maker Mirona Mara, who contributed the intro voice-over. In post-production, Maria Byrne provided the graphic novel-influenced cover image.

The Hands of Franky Machine is designed to be experienced in one continuous hour-long sitting, like a film or a play. The full audio will be available to stream and download from November 25th at thehandsoffrankymachine.com, and on all major social media and digital platforms.  Dan Comerford’s documentary film about the recording process can be viewed on the Cursed Murphy YouTube channel.

Fingers crossed, we’ll get to perform it live before too long. We hope you enjoy the trip.