Reality TV: The hosts of You vs Chris and Kem could be ITV’s next prime-time stars if they forget their schoolboy antics 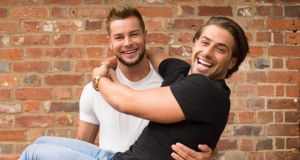 What did we do to deserve the glory of Chris and Kem? This year’s Love Island contestants are a sorry bunch by comparison, a bickering, preening selection of banter-free fitness instructors, personal trainers and models.

Whether it be Dr Alex (aka Dr Jedward) roaming the villa on the hunt for a smooch, Adam and his disturbing Neil Strauss-style wooing tactics or the box-headed blandness of New Jack, the laughs have been sorely absent from the show apart from Jack’s Day-Glo teeth. Most of this year’s boys shuttle from the fire pit to the kitchen to the swimming pool, bitching about the girls or each other, with only the depressing analysis of their nightly foreplay, fumbling or rutting discussed by Wes’s Do Bits Society breaking the unending tedium.

Looking back on the time that the country boy Chris Hughes and the Romford hairdresser Kem Cetinay spent in the villa now feels like reminiscing about the golden years of Ant and Dec. From their composition of the iconic hip-hop ditty Little Bit Leave It to Kem’s constant need for Chris’s reassurance about his appearance, their burgeoning friendship won the affection of a legion of viewers, not to mention celebrity fans like Liam Gallagher and Stormzy – who even ended up appearing on the show to dispense advice to the duo. The pair’s relationship was one of the only genuine couplings that managed to survive the show.

With ITV on the hunt for the new Ant and Dec, as the original BFFs are tackling tabloid hell and dealing with the kind of darkness not exactly fitting for a flagship light entertainment show, the station could do worse than look to the eternally affable Chris and Kem.

If nothing else their new show, You vs Chris and Kem (ITV2, Mondays), feels at best like one long audition tape for I’m a Celebrity, whether as presenters or (more likely) contestants. It pits the lads against members of the public in a series of various dares, a mix of Challenge Anneka, Jackass and the type of combative games inserted into Saturday Night Takeaway but without the prime-time budget. Essentially the show is masculinity at its dumbest. It’s a stag night with schoolmates egging each other on to almost kill each other for “jokes”.

With a nod to their Love Island past the boys receive texts from their challengers giving them a clue about what activity awaits them before they head off across the country. As with Queer Eye, it’s the off-the-cuff chats on the road that can provide the most natural comedy, as they ponder their shaving routines – “bit of a Veet around the pubic area” for Chris and a fashionable “fade on the pubes” for Kem – or when they pull over in a local green to race each other after Cetinay dubiously proclaims that he was “second quickest in Essex”. The two are full of exuberance, possessing the all-important chemistry (Kemistry?), charisma and easy charm that make them so likable.

Arriving on a farm to wrestle the Jason Momoa wannabe Josh in an inflatable pool filled with gravy, they make sure to hype each other up before entering the makeshift ring/Lidl paddling pool, complimenting each others’ bodies and “bulges”’ in their tinfoil capes and metallic budgie smugglers.

As a pigtailed Kem is repeatedly thrown over Josh’s shoulders the farcical fight turns into a montage of people sliding around a dance floor on You’ve Been Framed with the added aggression of slams and power moves as a panicked Chris looks on wailing “Get up Kem!” from the sidelines like a heartbroken mam. They end the challenge by tag-teaming Josh, earning a triumphant win before heading off to compete in a doughnut-eating dare.

Chris and Kem are caught in a dilemma of masculinity – stuck somewhere between testosterone-soaked posturing and enjoying their gentle, sensitive friendship

“I think I’m gonna take full advantage of my mouth,” declares Kem, his brow beaded with sweat as he eyes up the pile of glazed goods. After guzzling down three in a row he begins to retch, whereas Chris only manages to finish one before admitting he doesn’t really like doughnuts. Their chance to chow down on some dung beetles in a bush-tucker trial looks ever more inevitable with every dramatic belch and stomach-clutching grimace.

Unfortunately the ugly spectre of laddishness also looms. The nadir of their childish cheekiness comes with the task of waxing some rugby players’ intimate areas, which descends into homophobic innuendos and sniggers from the assembled team-mates.

Chris and Kem are caught in a common dilemma of modern masculinity – they are stuck somewhere between testosterone-soaked posturing and freely enjoying their gentle, sensitive friendship – they constantly proclaim their love for each other.

They may not be ready to rumble just yet, but these Love Island likely lads could end up becoming ITV’s new prime-time stars if they forget their schoolboy antics and fully embrace their blossoming bromance.