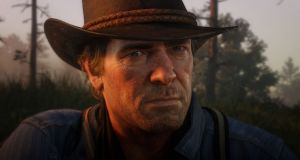 Roger Clark is one of several Irish-related actors in a game where Irish feature prominently.

From riding horses in McGarry’s Stables in Co Sligo as a teenager to traversing the Wild West on horseback as Arthur Morgan, the lead character in Rockstar’s hit video game Red Dead Redemption 2, Irish-American actor Roger Clark, has had quite the journey.

Born in the US, raised in Ireland and trained in Wales, Clark has drawn on all these experiences to produce a magnetic performance as Arthur in what critics deemed the best of last year in the recent Game of the Year awards.

Clark’s performance was one of the many reasons why RDR2 achieved the rare distinction of commercial success and critical acclaim, earning $725 million (€643 million) in its opening weekend, making it the highest-grossing opening weekend of any entertainment product ever, and achieving a 97 per cent average rating on Metacritic.

There are many things about RDR2 that make it an exceptional piece of work: the vast open world where more than 200 species of animal and thousands of people co-exist in intricate detail; the honour system which changes the game depending on how well or badly you behave within the world; the beautiful cinematography from the snow in the mountains to the balmy plantations of the south to the polluted old-world city of Saint Denis.

I can’t compare it to anything I’ve ever done

But what really makes the game stand out is the quality of the writing and the acting performance. A game so vast still needs a structure and quality story to make it work. That was achieved by Roger Clark and his colleagues, with a script running about 2,000 pages long and five years of development.

Clark is at pains to debunk the common perception that video games like RDR2 use only voice acting, with an actor in a booth with a script, where their lines are added to the animation. Rather, the vast majority of RDR2 is filmed in performance capture, where the actor wears a tight suit which outlines their body. Balls are located on specific points, where joints are situated, and a rigging suspended from the ceiling has sensors which translate the data into an algorithm within the screen.

Everything in cut scenes and many of the game’s interactions happen this way, everything from jumping stunts, even to one of the characters Javier Escuela, played by Gabriel Sloyer, playing the guitar with the sensor balls on his fingers.

The use of high-tech camera sensors now allows for the capture of more subtle facial expressions, allowing much greater depth to video game acting performances than ever before.

“I can’t compare it to anything I’ve ever done,” says Clark, who had mainly worked in theatre before RDR2. “I guess it would be like a five or six season television show in terms of the volume of the script. But that’s where comparison ends with the medium.

“No two players are going to play the game the same way. With the honour system, the way you play the game directly affects the narrative. It was fascinating to have to say this line as an ***hole or a man with integrity and make that work.”

Clark was born to an Irish mother and a second-generation Irish father in the US. As a child, he would go back to his mother’s hometown of Sligo every summer, and when his father retired, the family moved to just outside Sligo town when he was 12 years old. He would spend all his formative teenage years in the west, completing his Leaving Certificate.

“I had a thick American accent when I came over and all the kids picked on me for it, so I developed an Irish twang fairly quickly. I subconsciously sped it up, so I didn’t stand out,” Clark says.

“My Irish years had a huge impact on my life, I was maybe too young at the time to appreciate it.”

Clark left Ireland then to study drama in Glamorgan and picked up mainly theatre work with a company based out of Europe, before the opportunity for an upcoming Rockstar game came about. An avid player of the first Red Dead Redemption game, when he was asked to wear cowboy boots, he put two and two together about what he was getting himself into.

The Irish characters have a really important function in the narrative, it was great to work with Irish people playing non-stereotypical characters

In the first Red Dead Redemption game, there was a character called “Irish”, who played a stereotypical Irishman with a hackneyed accent from a non-Irish speaker. MacGuire is a lovable scoundrel, with a thick Dublin accent that could be captured only by an Irish actor.

“The Irish characters have a really important function in the narrative, it was great to work with Irish people playing non-stereotypical characters,” Clark says.

The camaraderie between the actors translates well to the game, which is important for a game where you spend hours on end with the characters travelling from place to place, with thousands of interactions between them. Arthur Morgan, the lead character, has been taken under the guidance of Dutch van der Linde but, over the course of the game, Arthur begins to question Dutch’s noble outlaw act.

“I wanted the arc of Arthur Morgan to be something that hadn’t happened in Westerns before,” Clark says. “A man that comes to terms with feelings he couldn’t understand before in his life and what comes from that.

“As Arthur confronts his own mortality, he answers questions he never thought before. It was something that really interested me in the Western genre.”

Clark took inspiration for Arthur Morgan from John Wayne and Toshiro Mifune from the Kurosawa movies, who had a “presence that I found fascinating”. He also took inspiration from Rob Wiethoff’s portrayal of John Marston in the first Red Dead Redemption game, although part of the challenge was to separate his character’s personality from a much-loved character like Marston.

Arthur Morgan was slow to warm to for some fans online, but over time he has become one of Rockstar’s best-received characters of all time.

At times, RDR2 can meander along slowly, with the ending so far in the distance, but the pay-off for the player is significant in the final few chapters, culminating in an ending that is worthy of any TV show or film. As Peter Suderman wrote in the New York Times, for many, last year’s best blockbuster wasn’t a TV show or a movie, but a video game.

“The best games reveal a mass cultural medium that has come fully into its own, artistically flourishing in ways that resemble the movie industry during its 20th-century peak and television over the past 20 years,” writes Suderman.

Clark feels the reason for this is that as a generation grows up having played video games, the audience matures with it as video games advance as a cultural medium.

“Video games are becoming more mature, and acting performances are becoming subtler as technology advances,” Clark says. “I think of the quality of the writing from Dan Houser, Michael Unsworth and Rupert Humphries was really spot on, and addresses the Western genre in a fresh new perspective.”

Clark, who has worked in theatre and television, says that RDR2 may be the best acting job of which he will ever be part.

“It is a fascinating medium and I feel so fortunate to see it unfold in front of my eyes. To see it unfold over the five years as I worked on it, a brand new medium which is becoming more and more popular, it is really a privilege.”