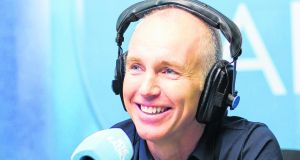 As one of RTÉ’s biggest stars contemplates retirement after three decades in broadcasting, there’s no hiding the trepidation in his voice at the prospect of life after radio. “‘Don’t ever retire,’ that’s been said to me on a number of occasions over the past couple of weeks,” he says, “because I’m not good with nothing to do.” With that bombshell, Ray D’Arcy (RTÉ Radio 1, weekdays) assures listeners that he’s not about to follow his station colleague Sean O’Rourke and quit the airwaves.

If O’Rourke’s announcement of his departure from his show (Today with Seán O’Rourke, RTÉ Radio 1, weekdays) is typically straightforward – a short statement on Tuesday’s edition to say he’s leaving on his 65th birthday in May – D’Arcy’s prosaic proclamation is just as characteristic. While the veteran current affairs presenter applies the same calm rigour to every story, no matter how big, his afternoon chat show counterpart will drill down into the minutiae of any issue, regardless of superfluity.

Thus D’Arcy’s non-starter of a statement on Wednesday’s programme is the preface to a rambling account of how, having intended to bake bread the previous evening, he ended up rearranging the kitchen. That morning, when he finally got around to making the loaf, it didn’t work out as planned. “It’s flat,” he says, referring to the unrisen bread, though the description might equally apply to his monologue. It’s a mesmerisingly pointless exercise in solipsistic navel gazing. Which, naturally, makes him the ideal presenter for our time.

Until recently, talking about everyday personal chores at such length was a sign of someone padding out airtime. Now, with most of society confined to home, it sounds like a dispatch from the front line. D’Arcy’s ability to capture our universal ennui isn’t his only quality that chimes with the current situation, however. For all that he cheerfully engages with exquisitely flimsy material – such as his chat with an Icelandic Eurovision entrant about the cancellation of the song contest – the host has always had a hangdog, even fatalistic streak alongside his more upbeat everyman persona.

“I’m finding that you’ve good days and bad days,” he remarks on Wednesday. “We’re all fed up now, the novelty has worn off.” He has a similarly resigned air as he ponders the Government’s ban on mass music and sporting events for the summer. “In the scheme of things it isn’t that major, but for a lot of people they were a sign of hope,” he says, suggesting the cancellation may be “the straw that broke the camel’s back”.

While D’Arcy is attuned to the country’s creeping frustration and despair, he’s also proactive in dealing with it, turning his show into a kind of one-stop shop for all your lockdown needs. There are gardening tips, baking recipes (from, oddly enough, Amnesty Ireland campaigner Colm O’Gorman), guidance on talking to children about grief and advice on coping with the loneliness of self-isolation.

For the last item, D’Arcy talks to former hostage Terry Waite, who having been held in solitary confinement for four years in Lebanon has a degree of expertise in the area. Unsurprisingly, after that ordeal, being stuck at home seems like “paradise” to Waite. But he’s able to offer wisdom on mental wellness during lockdown, despite a phone line so crackly that he sounds as if he’s still in west Beirut rather than eastern England.

Waite advises listeners t not to dwell on the negative, but to “learn to live with yourself”. It’s common-sense stuff, but heartening nonetheless, though D’Arcy could have chosen better parting words for his guest: “We’re going to have to let you go, Terry” veers perilously close to taunting someone who spent so long in captivity. Still, the item underlines D’Arcy’s alertness to the wider mood. His show may have been half-baked in the past, but right now he’s rising to the occasion.

Seán O’Rourke, meanwhile, carries on as before. The day after announcing his retirement, he’s back on the job, covering the summer ban on mass gatherings without so much as a reference to his impending departure. That said, there’s more lightness to his approach than usual, as if he’s relieved at not having to deal with this mess for much longer.

When Fr Richard Gibbons, rector of Knock Shrine, remarks that the locality “isn’t always guaranteed good weather”, O’Rourke offers a gently slagging reply: “Do you ever get good weather?” Later, when GAA pundit and former Derry footballer Joe Brolly dismisses the notion of the All-Ireland taking place owing to the sport’s contact nature, O’Rourke cracks to his famously combative guest: “There’d be no tunnel scraps.” Brolly is so downcast as he comprehensively demolishes any lingering hopes of a sporting summer that it even gets to the unflappable O’Rourke. “Okay Joe, I think we’ve heard enough from you,” he says, ending the interview. For whatever reason, O’Rourke sounds in sunnier form than his guests, which only adds to regrets that we won’t be hearing from him for much longer.

Sport may be off the menu, but some sectors are adapting to conditions. On Tuesday, the ever-reliable arts show Arena (RTÉ Radio 1, weekdays) hears how Galway’s Cúirt literature festival has replaced public interviews with online talks, with presenter Seán Rocks talking to novelist Kevin Barry about the event. Barry is in wryly doleful form, noting that his output has been affected by the crisis: “You start to wonder, with all that’s going on, do people want to know about my short story.”

The writer also notes that while he normally avoids digital contact, lockdown has brought “a slight softening” in his attitude, as his online interview for Cúirt shows. But Barry draws the line at the craze for socialising on Zoom: “I don’t have to look at you drinking on the internet.” “I’ll cancel the invitation,” replies a chuckling Rocks, finishing the conversation. Like any good host, he knows to quit while you’re ahead.

Perhaps the most original commentary on the pandemic can be heard in the unlikely setting of Lorcan Murray’s Classic Drive (Lyric FM), courtesy of Luke Clancy’s daily Culture File slot, which features arresting lockdown diaries from London-based composer Jennifer Walshe and comedian Marise Gaughan, currently self-isolating on a Co Kilkenny farm. Gaughan’s latest missive, on Irish funeral rites being disrupted by Covid-19, is especially honest, edgy and funny. She deems the Irish “quite skilled at the admin of death”, compared with England, where “everyone pretends it didn’t happen”. Robbing us of our customs is hard, Gaughan says. “We love it so much,” she deadpans. “Funeral sandwiches do just taste much better.” Now that’s morbid humour.

The Disaster Tourist: Excellent rendering of the extraordinary
10