Too Hot to Handle: The no-sex Love Island that Ireland loves

It’s Netflix’s most watched series in Ireland. Clearly, we like a bit of drecky dreck 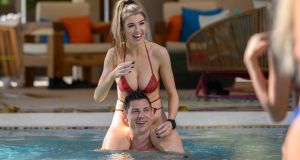 Nicole from Cork and David from Wigan, who believes ‘having an English accent in America is like having a 12-inch dick’

When Sharron from New Jersey decided to do “women and gender studies” at college, you have to wonder if he quite understood the nature of the course, revealing, as he did, that its main benefit was that it provided a “blueprint for how to pick up women”. And once picked up, they are, he promised, in for a treat. “What I’m most proud of,” he said, “is my penis – I have this picture of it measured next to an air freshener can.”

Sharron is one of the stars of Too Hot to Handle (Netflix), all eight episodes of which were released last week, the reviews generally a touch unkind. American John Serba, for example, described it as “the dreckiest dreck ever drecked”. Considering the series is Netflix’s most watched in Ireland since it was unleashed, we clearly are a nation with a soft spot for drecky dreck.

Think Love Island with a twist, a humongous one, the contestants including Matthew from Colorado who fantasises about “spreading my seed and rolling the dice of my genetic build with different women around the world”.

“Sexually, I’m a lot to handle,” he says. “You’re not wrong, I think I conceived just watching you,” says narrator Desiree Burch.

Haley from Florida has some words tattooed on her back. “What language is that,” she’s asked. “I don’t know,” she says. She loves going to frat parties, where “literally everyone’s hammered – a girl broke her neck falling off the roof, but other than that it’s, like, fun”. She studies geography but has no idea where Australia is.

There’s Chloe from Essex who admits that she’s “not the brightest spark in the ...... eh ...... book” and Rhonda from Georgia whose ideal man would have “tattoos and a job”. There’s Nicole from Cork (we’re represented!) and David from Wigan who believes “having an English accent in America is like having a 12-inch dick”.

There’s Harry from Queensland who loves foreign accents – “I literally turn in to butter” – and Kelz from London whose idea of a long-term relationship is “four weeks”. And there’s Francesca from Vancouver who’s hardly in the door when she wants to lick David, Kelz and Harry’s bodies.

So, all these impossibly chiselled people, who we get to see showering in slow motion quite a bit, are assembled in a heavenly Mexican resort, their only thought to send the hanky-panky levels off the Richter scale. “Everyone is, like, proper sexual,” says Chloe. “We’re going to have fun here,” purrs Kelz.

But then their host Lana, an Alexa-like voice coming out of a cone, gathers the contestants to break the calamitous news: to win the $100,000 prize they will have to “abstain from sexual practices” for the entire duration of their stay as part of her effort to put them “on the path towards making deeper and more meaningful connections”.

“Whaaaaaaaaat,” they reply as one, like an earthquake had erupted in their brains.

And every time the rule is broken, the prize will shrink.

“This will also apply to self-gratification,” adds Lana. “What does that mean,” asks Chloe. When she’s told, she wears the look of someone who’s lost a winning Lottery ticket.

Haley is sanguine. If she wins, she says, she’ll get a nose job and clear off her credit card. Chloe is too. “If I’m tempted I’ll be, like, ‘think of your Nan!’” If Mary Whitehouse was still with us, she’d be binge-watching this too.

Sharron puts away his air freshener can. This, you sense, will be the dreckiest month of his life.