Photographing the Troubles: ‘I thought I had lost my humanity’ 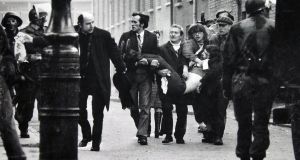 Bishop Edward Daly carries a blood stained handkerchief ahead of the body of Jack Duddy, who was shot dead in Derry on Bloody Sunday. Photograph: Stanley Matchett

It’s rare to hear a photographer describe a picture that he didn’t capture.

But that is how Alan Lewis presents his memories in Shooting the Darkness (RTÉ One, Wednesday, 10.35pm), still vivid and raw, of Belfast’s Balmoral Furniture Company bombing in 1971. In the early days of the Troubles, Lewis was an eager but respectful press photographer, positioning himself beside an ambulance and away from the rescue efforts.

He watched through his viewfinder as the body of an infant, dead and exposed, was carried out from the wreckage. “And I just froze,” he remembers. “I couldn’t take the picture.”

His immediate reaction, however, was self-recrimination, resolving never to shy from an image again. Soon after, another child killed by the blast was brought out, this time wrapped in a blanket. “And I got a picture.”

One of the engrossing things about director Tom Burke’s excellent and supple documentary on the photographers of the Troubles – accurately compared to accidental war photographers – is the sense of people quickly arriving at an ethical code with barely any time to think.

Lewis reassured himself that the horror of his Shankill image would work as a deterrent; that people would be repulsed by its horror.

Years later he realised that it instead it was used in a recruitment drive for loyalist paramilitaries.

It’s almost impossible, against the bitter circumstances of the Troubles, to police the meaning of an image or to restrict its interpretation. But it’s fascinating to hear photographers analyse frozen moments of horror for their aesthetic properties alone.

When Stanley Matchett revisits his iconic photograph from Bloody Sunday, of Bishop Daly waving a blood-stained white handkerchief while men bore away the body of a young Jack Duddy, he likens its composition to a Caravaggio painting. Today we see him photographing a gable-end mural that recreates that same picture, retracing an instant.

These photographers were nobody’s fools. They remark on the savvy PR of the Provisional IRA – always available and accommodating, stage managing their scenes, waging a war through images too. In the astonishing example of Martin Nangle, who captured the IRA murders of two corporals in the charged atmosphere of Kevin Brady’s funeral, they are also bravely impartial.

Nangle, instructed like others to hand over his film, discreetly switched rolls and preserved a record of the atrocity, indifferent to personal consequences. “It’s better to treat it as a job, as an observer,” reasons Nangle, “and not to get too close.”

The documentary subtly allows the photographer to address the consequences of detachment too; the numbing effect of witnessing the aftermath of so many murders and massacres. “I did think, for a small time, that I had lost my humanity,” admits Lewis, when his images seemed divorced from their impact. It was, instead, something closer to shock: suddenly in tears in his darkroom, his responses, like his pictures, required time and space to develop.

“They are honest witnesses,” says Irish Times photo editor Tom Lawlor, “documenting their own tribe.” It’s a noble assessment, much like the documentary itself, of the duty and bravery behind these historic exposures.