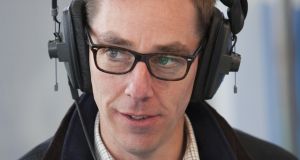 Ryan Tubridy: a pint ends up as another tedious skirmish in the culture wars.Photograph: Kinlan Photography.

When it comes to his tipple of choice, Ryan Tubridy has always followed Flann O’Brien’s advice: a pint of plain is your only man. Judging by the presenter’s many references to the subject on the Ryan Tubridy Show (RTÉ Radio 1, weekdays), a pint of stout is more than a mere alcoholic beverage, it’s also a symbol of civilised conviviality and common sense. Even so, Tubridy’s affection for the black stuff can reach alarming levels. “Damn it,” he says, opening his midweek show. “It’s 9am on a Wednesday and you have me dying for a pint.”

Normally, such an admission would be the cue for an intervention. But Tubridy’s craving is more Proustian than Behanesque, unlikely as that sounds. As part of his introductory monologue, he reads out a list of Irish B&Bs recently named among the world’s best, including one on Inishbofin where he has stayed himself. “I think one of the best pints of Guinness I’ve ever had in my life was there. It’s nectar,” the presenter says. Slipping into a reverie, he recalls his happiness on the Co Galway island, where the stout apparently tastes and even sounds better. “You can hear that hiss off the pipe as it touches the glass and pours and you wait and wait until it’s ready.”

By now, his riff sounds like advertising copy, but he’s not finished. He launches into a paean to “one of my favourite things in the world, a bag of chipper chips”. Invoking restaurateur Derry Clarke’s endorsement of the humble chip, Tubridy again falls into a trance, describing “the first puff of the bag opening” and the “dew drops” on the accompanying can of cola.

Such depictions are so vivid as to be almost irresistible. Almost. As Tubridy wraps up, he adds a little kicker: “All the things I’ve mentioned have been borderline banned in modern society.” It’s a throwaway line, but it slightly sours the mood. Intentionally or not, it seems like a crack at those snooty snowflakes – a frequent bugbear for Tubs – who don’t think beer, chips and cola are the acme of epicurean experience. What starts as an invitation to share in simple pleasures ends up as another tedious skirmish in the culture wars.

He also has a slightly barmy conversation with Alfie, a loquacious former salesman from Athenry. Tubridy sounds genuinely delighted as Alfie, who remembers how he sold hot water bottles around the country in the 1980s. “If you come to Athenry we’ll have a pint.” adds Alfie. “I feel like I’ve just made a friend,” Tubridy replies. No wonder.

According to the continuity announcer, comedy panel show You Couldn’t Make It Up (Newstalk, Saturday & Sunday) is “not for the easily offended”. This statement builds up unrealistic expectations. Returning for a second series a mere five years after its first run, the programme isn’t particularly offensive. At times, however, it might be more appropriate to caution listeners that the show is for the easily amused.

It’s far from a laugh-free zone, to be fair. Host Pat O’Mahony brings a knowing jocularity to proceedings, while the two teams of comedians rattle off a few good jokes. Colm O’Regan makes wry observations about Danny Healy-Rae’s business instincts while Emma Doran’s characterisation of Arlene Foster is slyly subversive: “She has the head of a camogie coach”.

But the format seems unduly convoluted, at least on first listen. The panellists comment on news events before creating a sketch using elements chosen by O’Mahony. Add the unevenness that inevitably comes with comedy improv, and it’s no surprise that things can fall flat. Despite what some comics think, it doesn’t matter how many times you speak in an exaggerated Ulster accent, it’s still not funny.

For all that, things come together in the end. Sharon Mannion and the reliably lugubrious Karl Spain deliver a skit about Donald Trump and Roy Keane on the moon, which is far more droll than the zany set-up suggests. You couldn’t make it up, but you could do worse.

Sean Moncrieff (Newstalk, weekdays) is a bit of a joker himself, but on Monday he shows his penchant for tackling more weighty, not to say contentious, issues. The presenter (and Irish Times columnist) talks to Nathan Phillips, the Native American activist involved in a much-publicised confrontation with a Catholic high school student attending an anti-abortion rally in Washington DC. The encounter has become the latest flashpoint in a divided America, with competing narratives about what actually happened.

Phillip’s own account is sometimes vague, but his story is clear enough. After taking part in an event for indigenous peoples, he saw the high school students exchanging insults with a much smaller group of African-American activists. “These right to life groups were building themselves up to attack those guys,” he says, so he picked up a drum, chanting a prayer as he put himself “between a beast and its prey”. Clearly no fan of the students he confronted, Phillips also says there was “out and out racism on both sides”. Protecting freedom of speech and the right to assembly was his real priority, he insists.

It’s necessarily one-sided, though Moncrieff does try to clarify Phillips’s testimony. Either way, the response is furious, if predictable. “The people on Twitter taking the side of the boys tend to be pro-life conservative people,” Moncrieff remarks.

By way of defusing the tension, he swiftly moves on to an interview with biological scientist Mark Laidre. “He’s discovered why the hermit crab has such an unusually large penis,” the host explains. You’d need a drink after that.

Radio Moment of the Week: Dermot and Dave crow away

In their endless quest for weird and wacky trivia, Dermot and Dave (Today FM, weekdays) talk to Blessington resident Trish, who was attacked by a crow during the summer. Messrs Whelan and Moore sound disbelief as Trish tells of being pecked by the angry bird, but are more tickled by their guest’s turn of phrase, particularly her colourful faecal references. “Since that, I’ve been afraid of my s***e of crows,” Trish says, to much hooting. Whelan has the final word, however: “When you’re attacked by a crow, you must look like a raven lunatic.” Ouch. Please, Dermot, nevermore.