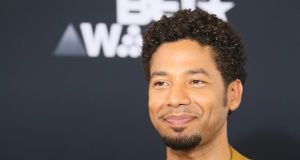 Jussie Smollett, star of the hit US TV show Empire, has been hospitalised after being attacked in a possible hate crime. The 35-year-old actor was attacked on Tuesday in Chicago by two men who put a rope around his neck and poured an “unknown chemical substance” on him.

Police said the incident was “possibly racially charged” and the men shouted “racial and homophobic slurs”.

Smollett was taken to Northwestern Memorial Hospital in Chicago. Police said Smollett was in “good condition”.

A police statement said the Chicago Police Department received a report of a “possible racially-charged assault and battery involving a cast member of the television show Empire. Given the severity of the allegations, we are taking this investigation very seriously and treating it as a possible hate crime.”

Smollett plays Jamal Lyon, the gay son of a music mogul, in the popular Fox drama.

The statement continued: “The offenders began to batter the victim with their hands about the face and poured an unknown chemical substance on the victim. At some point during the incident, one of the offenders wrapped a rope around the victim’s neck. The offenders fled the scene.”

The King Centre for Nonviolent Social Change, which promotes racial equality in the US and was founded by Martin Luther King Jr’s wife, said it was praying for Smollett.

A tweet from the nongovernmental organisation said: “The oceans of history are made turbulent by the ever rising tides of hate.

“We must turn this tide and ensure that no human beings, including our LGBTQ neighbours, are dehumanised and fettered by hate and violence. Praying for Jussie Smollett.” – PA