Room to Improve: ‘I always thought there was a lack of imagination here’ 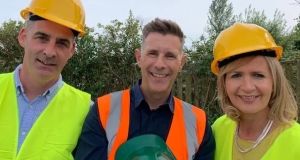 David and Nessa fended off the pergola dreams of Dermot Bannon. Photograph: RTÉ

By this time, metaphor pedants, pushed beyond breaking point, will be trumpeting at the screen: “YOU CANNOT HAVE A ROOM OUTDOORS!”

While owner Nessa explains what she loves about the place, her husband David stays manfully out of the way, and Bannon waits patiently to tell them why they are wrong.

As ever, he returns with a design that will re-orientate both their living space and their personal taste until everything is duly south facing, illuminated by a roof light and trimmed with a pergola.

This last feature is so wantonly decorative that its top related Google search is, “What is the point of a pergola?” Bannon, however, has to have it. And ebonised oak fittings. And polished concrete work surfaces. So much so, that every push back or mishap leaves him adorably crestfallen.

“I don’t want a level floor,” Bannon pouts when the builders identify a fundamental structural flaw. “I want a roof light and a pergola.” Why must this cruel world dump on his dreams?

“It’s very difficult to persuade him not to do something,” says David.

Indeed, just listen to Bannon finally explaining the point of a pergola to Nessa: “It defines that space as an outdoor room.” An outdoor room? Is this for the elephant? That’s why it’s unfair that Gavin, one more chef for the broth, teases Bannon, “I always thought there was a lack of imagination here.” He wouldn’t say that if he heard Bannon’s hard-sell efforts to rebrand cement: “If this was called concreté we’d all love it.”

Nine months later, the house is revealed, streaming with light, gleaming with tasteful fixtures and teeming with so many expensive furnishings you suspect the owners will be in debt for several generations to come.

If that is the case, it is not evident in their fulsome gratitude – “It’s fantastic, such a transformation,” approves Nessa, slightly amazed to have resisted the concreté and the pergola – while the garden has been tamed into a modest zig-zagging hike through flowers and shrubs. All told, it has only pushed them €80k above their initial, apparently unmoveable budget. But that’s an elephant for another day. At least they have the room for it.

‘Black hair is so much more than hair’: Emma Dabiri’s passionate exploration of identity
8