Wells has been widely criticised for his remarks, characterised by many as homophobic 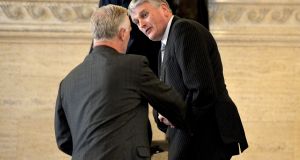 Jim Wells won’t be watching Strictly Come Dancing again. The show is “wonderful”, says the South Down Member of the Legislative Assembly, but when the BBC said it was open to having same-sex dancing partners on the popular entertainment show, his interest in it died.

Wells – a member of the Democratic Unionist Party (DUP) – doesn’t have a TV, but is friends with a couple who are “avid enthusiasts” for the the popular entertainment show that pairs celebrities with professional ballroom dancers. “They regularly invite me round for dinner to watch it,” he told BBC Radio Five Live’s Stephen Nolan Show. He made further comments about the programme in an article in the Belfast Telegraph.

Wells was widely criticised for his remarks, which were characterised by many as homophobic. There were multiple reactions of disgust on Twitter, where users commented that Wells fed bigotry and homophobia, that Northern Ireland’s reputation “is bad enough without people thinking we’re all like this”, and that the “deluded obsession he has with ‘gays’ is just not normal”.

One asked who cared what Jim Wells thinks, “apart from a bunch of bigots trying to pretend it’s still the 1700s”?

Despite the criticism, Wells seems delighted to talk at length to The Irish Times. “How posh. They want to talk to a humble, obscure DUP backbencher?” he says.

He says most people who read this in the Republic will ask “who on earth is he?” Tell them to “look up the Irish for dinosaur”, he advises.

What’s the Irish for ‘water off a duck’s back’?

Jim Wells is a 62-year-old MLA and a former deputy speaker of the Assembly. He was minister for health for eight months in 2014 -15. He resigned that post following remarks linking same-sex relationships to child abuse. He later apologised for those comments.

He has been accused of being a science denier, and condemns homosexuality and abortion. He worked for the National Trust before entering politics and resigned his membership over gay pride issues; a few years ago he was quoted as supporting a ban on gay men donating blood (and spent £39,000 of NI health department money on a legal defence of the ban).

Wells has also lobbied for creationism and last year compared abortion to the Holocaust (afterwards he said this was a numerical comparison only). He lost the DUP whip 18 months ago following an attack on the party’s leadership, but is still a party member.

Wells happily expands on his views about “Strictly” to The Irish Times. This opinion expressed to the BBC represents his support for the institution of the family, he says. “Up till 18 months ago BBC said it was inappropriate to have same-sex couples dancing because Strictly Come Dancing was aimed at the family market.”

Wells talks about the 9pm “family viewing” watershed, before which people can watch “silly things, to entertain, not to challenge or intrigue”. It would be “an awkward question for parents, if their children asked why are two women or two men dancing together”, says Wells.

He talks about the winning formula of Strictly, and scenes where journalist John Sergeant pulled his professional dancing partner across the dancefloor like “a sack of potatoes”, or Ann Widdecombe’s appearances: “she was also a useless dancer”, but he loved her “derring do”.

Those “magical TV moments” will for him be no more. He also regrets the end of Blind Date, which he claims “died a death” after lesbians and gays were included, and “a lot of families were not remotely interested”.

It’s not just light entertainment that Wells finds problematic. The sight of “elephants copulating on David Attenborough before 9 o’clock” is also embarrassing for families watching TV.

Wells is unhappy that no one can talk anymore about “the family as the basic fabric of society”, and that “every day that goes by this is undermined. I believe in marriage. I can hear from your intake of breath [there is none] that you’re shocked and horrified, young lady.”

Does he have an obsession with homosexuality? “That is a valid question, young lady. I don’t want to do media on this at all, but I’m the only one prepared to speak out,” he responds.

“I don’t like being typecast,” he says. “I also speak out about the public toilets in Kilkeel or litter in the Mourne Mountains. I don’t get up in the morning totally fixated [about those issues], but I do get asked to do it.”

Losing the DUP party whip but remaining a party member has allowed him to speak his mind, he says. “I don’t have the press office on to me offering ‘advice’ before interviews, and don’t have to ask permission. I still have the DUP brand but I’m not tied to their discipline. They can’t come to me after an interview in The Irish Times and say, what on earth are you playing at?”

As for those who criticise his controversial remarks, he says he doesn’t care. “What’s the Irish for ‘water off a duck’s back’?”