Writing Ross O’Carroll-Kelly: ‘I think in the voice of a f**king idiot 12 hours a day’

In RTÉ’s We Need to Talk about Ross, writer Paul Howard tells how he almost killed RO’CK in 2007 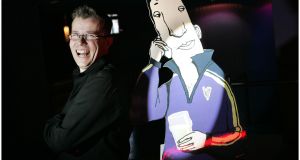 “It was a means of getting under their skin,” remembers Paul Howard of his decision to invent an insufferably privileged, monstrously egotistical lion of the Southside Dublin schools rugby scene. I wanted them to hate what I was doing.” As everybody knows, and as We Need to Talk about Ross (RTÉ One, Monday, 9pm) routinely reminds you, it didn’t turn out that way.

“I didn’t know that about satire,” Howard continues, “you can hold a mirror up to people but they can quite like what they’re seeing.” It’s a lesson that the satirical depictions from Alan Aykbourne’s farces to The Sopranos wiseguys learned too – that however lacerating your intention, everyone is flattered by a good likeness, privately assured that they can see their neighbour, never themselves.

At its most gleeful, this recapitulation of the life and times of Ross O’Carroll-Kelly – a man high on self-confidence and low on self-insight – asks his idol, Brian O’Driscoll, to compare himself to the fiction. “I think we’re kind of kindred spirits,” allows O’Driscoll with the mild mortification of a man who has already said too much. “One achieved [his potential], and the other was what could have been.” There, but for the grace of BOD, goes he.

Howard discovered schools rugby and its overbearing, affluent milieu as a young working class sports journalist with a chip on his shoulder.

“I don’t give a fock how you think I played,” he recalls one Blackrock student informing his father. “Just crack open the wallet.” That is essentially Ross O’Carroll-Kelly’s origin story, or so the Ledge goes.

And if Howard ever found it galling to have his portrait so willingly embraced by his targets, he has made his peace with it over the course of 19 bestsellers, three stage plays and a newspaper column that has been running for more than 20 years.

That professional rugby players past and present, such as O’Driscoll and Jonathan Sexton, can talk about Ross as though he was real – so mortifyingly so that Sexton once left the theatre upon hearing his own name at the interval – and while Ryle Nugent and George Hook are so amused by their own likenesses, makes it seem that Howard is somehow subordinate to his creation.

“Doing what I do requires me to essentially think in the voice of a fucking idiot for 12 hours every day,” he says, rather candidly at a public reading. “Losing him is the toughest part. I hear that voice all the time.”

The documentary is best when it can lose Ross too, with what feels like some reluctance, and consider Howard as a writer and a man: a gifted, passionate sports journalist, with an inherent sense of fairness and an unforgiving eye for cheats. (He pursued the Michelle Smith De Bruin scandal when it seemed like national sacrilege to do so.) His work rate is striking, keeping five or six projects on the go at anyone time. But Ross seems like his most demanding boss.

The books come, like clockwork, in yearly intervals, and while Howard’s response to the economic vagaries of the last two decades have made Ross a real chronicler of the times, a meeting with his editor ahead of book 19 doesn’t present Howard as a man urgently possessed by his muse. “I don’t know what’s on the cover of this book,” he admits, as though that was the logical starting point. “I don’t know what it’s called.”

The documentary doesn’t dwell on a crisis of confidence, in 2007, when a scathing review in the Sunday Tribune (until then Ross’s home), seemed to confirm Howard’s own worst fears: that Ross should be put out to pasture. That he nearly was is the programme’s most interesting pivot. Instead, the financial crisis happened, and while Ross learned to strive, Howard learned to love Ross, a beleaguered father and social barometer.

It’s nonetheless hard to decide if the final scene is meant to be a kind of reconciliation or humiliation, ending with Howard (“their dancing fool,” he laughs) addressing a school assembly in Blackrock College. They thank him by encouraging this scourge of unchecked pride to bear aloft this year’s Senior Cup trophy. This he gamely does, mock braying, “For Mum, for Dad, for Rock, for God!” Now that’s satire.