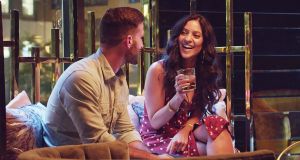 “Sometimes things like this are so bullshit,” shrugs one of the impossibly gorgeous people we meet in Dating Around, sharing a common complaint about New York’s dating scene: “So surface, and such a waste of time.”

To combat this, presumably, she has agreed to participate in a new Netflix show that sets her up on five blind dates, so identical in structure that she must wear the same outfit, eat in the same restaurant (and at the same table), stick to the same conversation topics, and share the same post-dinner routine.

Sometimes reality-TV dating shows are so bullshit, so surface and such a waste of time, and Dating Around is probably one of the most compulsively watchable and pleasurable examples.

The conceit of the show is to offer a fly-on-the-wall account of these dates – if that fly also had access to cinematic steadicams, perfect lighting, and a very lively editing suite.

Without a jabbering host, or any explanation that can’t be relayed by elegantly animated text (“Five first dates. One second date.”), Cupid’s bow is now as reassuringly frictionless as an Uber ride, splicing all five dates into a whirl of slight variations in identical circumstances. If, like some of the hopefuls here, I can recycle my jokes shamelessly, let’s call it Groundhog Date.

The hard work here is in the invisible magic of casting, finding the right people. The six daters here, each given their own episode, are as broadly diverse a group of people as you might find who can afford to live in New York with madly exotic jobs: an even split of men and women, involving a panoply of races, a mingling of sexual orientations, and – in what feels like the show’s most radical inclusion – one older dater. The signal appeal of the show, of course, is to allow the viewer to date vicariously through all of them.

And you know something? Dating in New York as an impossibly beautiful and professionally accomplished person is hard. Perhaps it’s the format of the show – which makes most of the blind dates seem like competing supplicants – or the particular work-hard, play-hard pressures of Manhattan living, but most of these encounters feel like relentlessly upbeat job interviews.

There are moments of pushy self-promotion (“You’re lucky to be here with me”), stealthy information gathering (“Why are you single right now?!”) and numerous hints of desperation (“How do you think this date is going?”). There are let-them-down-gently hugs; let-them-down-curtly blow-offs, one applaudable walk-out (Go, girl!) and one needlessly ugly blow-up (Men are bastards.).

That might sound like another cynical exercise in herding together personality clashes for our viewing pleasure. But apart from pairing a sharp-witted tech worker, burned before by a cruel ex, with the vulgar employee of a strip club, most of the dates are articulate, intelligent and fun and stand a real chance. Leonard, a gentle widower, is spoiled for choice in particular.

For dating tourists, there is much to discover here: like a generalised fatigue with dating apps but a breezy comfort with sliding into someone’s DMs (“Can I get your Instagram?”); or the etiquette in discovering whether your gay date is a top or a bottom; or, for all their apparent candour, only the people closer to retirement age talk frankly about drug-use on camera; or, if you’re a lesbian in New York, it’s almost harder to end a date without finding yourself in a committed long-term relationship.

Perhaps that says more about the show’s good nature, which really does seem to believe that New York daters have suffered enough.

It also saves its best chemistry for last, in a date between two people so palpably good together, with just the right level of trust and tension, that you hope to watch the rest of their lives together.

For all its compulsive swiping in the restless city, that may be the show’s own hopelessly romantic desire. Even Dating Around just wants to settle down.