Other Voices: Line-up revealed of every show in 17th series

Series to screen performances and interviews from the maiden Ballina event 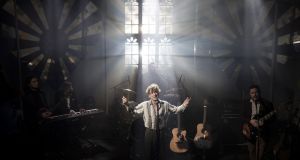 Other Voices returns, with plenty of Irish acts including the hotly tipped David Keenan. Photograph: Other Voices

The long-running live music series Other Voices returns to RTÉ 2 on Thursday with a host of performances and interviews recorded in Dingle, Ballina, Electric Picnic and the Orchard Sessions at Intel.

The brainchild of Philip King, Other Voices first aired in 2003 and styled itself as a showcase for intimate musical performances with St. James’ Church in Dingle serving as its spiritual home. Over the years, it has played host to the likes of Amy Winehouse, The National, Damien Rice, Glen Hansard, The xx, and Hozier, to name but a few.

Now into its 17th series, it hasn’t strayed too far from its roots. Hosted by Annie Mac, Huw Stephens and May Kay, the latest series will feature artists from across the musical spectrum performing live in unique venues across Ireland.

In something of a departure, the series will screen performances and interviews from the maiden edition of Other Voices Ballina, which took place last September and saw St. Michael’s Church stand in for its Dingle counterpart. The series will air three episodes from Ballina and will include sets from Villagers, Maverick Sabre, Julien Baker, Little Green Cars, Mick Flannery, Sam Fender and more.

Elsewhere during the series, viewers will be treated to dispatches from the IMRO Other Room in Dingle as well as the Orchard Sessions at Intel in Leixlip.

Finally, the series will conclude with an Electric Picnic special featuring performances recorded at the Other Voices stage at last year’s festival. Norwegian pop princess Sigrid and great Irish hope Dermot Kennedy are among the notable guests there.

The nine-episode run kicks off on Thursday and here is what you can look forward to over the next few weeks.