Game of Thrones: What to expect in the final season

On April 14th, the eighth and final season of HBO’s biggest hit kicks off. Here’s what’s in it

Creators of Game of Thrones have revealed that the hit television show will return in April 2019 in the first teaser trailer for its eighth and final series. Video: HBO 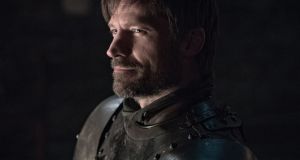 Eagle-eyed fans have noticed Jaime Lannister sporting some surprising armour, in a Game of Thrones photo released by HBO

This article contains spoilers for Seasons 1-7 of ‘Game of Thrones’.

It’s been more than 540 days since Game of Thrones last aired a new episode.

That was the cataclysmic Season 7 finale, which both demonstrated the annihilative power of a zombie ice dragon and finally paired the two most attractive people in the story, Daenerys Targaryen (Emilia Clarke) and Jon Snow (Kit Harington), not long after revealing that they are apparently aunt and nephew. (Other things happened, too.)

Our long Thrones-less night will end on April 14th, when the eighth and final season of HBO’s biggest hit finally kicks off.

Here’s a brief rundown of everything we know about Season 8.

It will be big!

Monumentalism has always been a key component of a show that began with a giant sword beheading a deserter and most recently saw a zombie dragon destroying a leviathan wall.

But this season will be even bigger, with six nearly feature-length episodes and some of the largest, most complex sequences ever filmed for television. The final clash between the heroes and the undead White Walkers, in particular, took many weeks to film, including 55 nights of outdoor shooting.

That episode was overseen by veteran Thrones director Miguel Sapochnik, whose previous episodes like Hardhome and Battle of the Bastards featured some of the show’s most dazzling action scenes. But the new one “makes the Battle of the Bastards look like a theme park,” Peter Dinklage told Entertainment Weekly.

And that’s presumably before the show even gets to the final clash to determine who actually wins this whole, you know, game of thrones.

There will be new alliances

Some of the more enjoyable scenes of the occasionally lacklustre Season 7 came when the far-flung characters we’ve been watching for years finally met, or were reunited. Jon and Daenerys, of course, but also Cersei and Daenerys. Jaime and Daenerys. Arya and Sansa. The Clegane boys.

As one might expect, battles between the living and the dead inspire new partnerships. A teaser scene released by HBO shows Sansa offering the Stark stronghold, Winterfell, to Daenerys, although Sansa doesn’t seem particularly thrilled about it. According to EW, the season premiere opens at Winterfell and calls back to the show’s pilot, with Daenerys and her army arriving at the castle much as King Robert’s procession did in the beginning.

It will be satisfying. Or not

Casey Bloys, HBO’s programming president, has said that David Benioff and DB Weiss, creators of Game of Thrones, have ended the show in a way that is both dramatically and emotionally satisfying. But what else would he say?

This jibes with what George RR Martin, the godhead of the Thrones universe, has suggested, which is that the end of the saga will be bittersweet.

“I don’t know that I, as a writer, really believe in the conventional, clichéd happy ending, where everything is resolved and the good guy wins and the bad guy loses,” Martin said at a book fair in 2016. “We very seldom see that in real life or in history, and I don’t find it as emotionally satisfying myself as what I like to call the bittersweet ending.”

Fan theories abound about, well, everything involved in this show. And a fringe-y but persistent one holds that the show’s ur-bad guy, the undead Night King, will be the one who ultimately sits on the Iron Throne.

That seems less “bittersweet” than “nutty and unlikely”. But so did plenty of other things that eventually transpired on Game of Thrones, so who knows?

Of course, this isn’t really the end

Well, this part of the story will end. But given the show’s extraordinary - and extraordinarily profitable - success, we’ve most likely only just begun exploring the Thrones universe.

This summer, HBO will begin shooting a prequel pilot written by Jane Goldman and Martin, set thousands of years before the events of Game of Thrones and starring Naomi Watts, among others.

HBO has yet to confirm that the pilot will be turned into another series. But AT&T didn’t buy HBO’s parent company, Time Warner, only to let one of its most valuable pieces of intellectual property go dormant.

Martin and Goldman’s concept was one of several prequel pilots HBO developed, and the network hasn’t ruled out moving forward on one or more of the others. “It’s an incredibly rich world that George has created,” Bloys told Deadline recently. “So, I think we’d be crazy not to take a shot.”

So while winter is finally here, this game will be on, in some form, for the foreseeable future. – New York Times