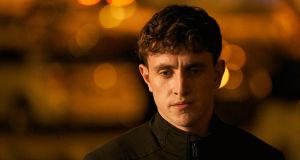 Hettie Macdonald directed the all-time-classic Doctor Who episode Blink, a phantasmagorical tour de force rightly regarded as one of the Time Lord’s greatest adventures. But she was also tangled up in the soggy prestige-TV misfire that was Sky’s Fortitude. So she brings something of a mixed record to the RTÉ/BBC adaptation of Sally Rooney’s Normal People.

She is taking over at the series’ halfway point from Lenny Abrahamson. You may struggle to see the joins. Abrahamson imbued the first six half-hour episodes of Normal People with the virtuosic glumness that is his trademark.

Macdonald does good glum, too. This we see in an early scene in the seventh episode in which Paul Mescal’s Connell, the mumbly GAA hunk Planet Lockdown didn’t know it needed, goes home to Sligo for the summer. He has apparently broken up with Marianne and also with Daisy Edgar-Jones’s weird stab at sounding as if she’s from the west of Ireland. Soon he is snogging a local outside a chip shop.

Abrahamson tends to take the perspective that Ireland is a drizzle-soaked dystopia. See, for instance, What Richard Did and, especially, Garage, which confronted audiences with the stunning insight that working in a tumbledown petrol station in a forlorn part of the midwest might be slightly depressing.

Macdonald is very much carrying his baton. For the snog-happy Sligo scenes she has found a way to make the sky feel even lower and more brooding than is actually the case.

Back at Trinity College Dublin, meanwhile, life is a blur of browns and greys, the only source of light the shiny and very punchable face of Marianne’s new boyfriend, Jamie (Fionn O’Shea). If you have ever grumbled, as I have, about the absence of smackable Dublin 4 archetypes in a drama set at Trinity, then Normal People makes amends. Jamie is controlling and snobbish and seems to have stolen his hair from mid-period Justin Bieber.

Is the connection between Jamie’s twerpishness and his lack of stature a coincidence? He is essentially an evil hobbit possessed by the duelling spirits of Ross O’Carroll-Kelly and Joffrey from Game of Thrones.

That’s in contrast to the strapping and morally pure Connell. As is his wont, he blunders back into Marianne’s life. Not much has changed. For one thing, he still cannot quite speak in complete sentences. “Marianne… I… um… ah,” he says at one point. This is classic Connell, and apparently the world cannot get enough of it. Who could have suspected the 21st-century Mr Darcy would be an underage midfielder from Sligo whose motto is “Sure, look it…”

Connell, as we are reminded over and over, is a poor person. Lucky for him, then, that he wins a scholarship at Trinity. Alas, he is mugged out celebrating with pals that same night. He has a girlfriend. But, rather than ring her, he calls on Marianne, who, because she is middle class, is having a dinner party with pals, presided over by the dreadful Jamie.

The issue of class arises again in the following episode. It’s the one set at the Italian villa belonging to Marianne’s mother, where Jamie has a meltdown about champagne glasses, and Connell and Marianne freewheel through the countryside.

At a piazza, Connell goes all Noam Chomsky on his on-off paramour. “It’s money, though, isn’t it?” he says. “The substance that makes the world real.”

“I am conscious of the fact that we got to know each other because your mother works for my family,” Marianne replies between mouthfuls of Cornetto. “I think it’s totally fair if you resent me.”

Obviously, no Irish person would ever speak like this. The exchange highlights, once again, the tin-can qualities of Normal People’s musings on class. Marianne and Connell in the real world are unlikely to have even gone to the same school.

Private schools don’t exist only in Dublin; middle-class and rich people across Ireland have been sending their kids to boarding and fee-paying schools for decades. Or, failing that, to a “good school” some distance away, where their offspring won’t mix with the locals.

So Marianne would more likely have been packed off to boarding school. Either way, I find it hard to imagine she would have had much to do with a lad from the town. Even if she wanted to outrage her mother by taking up with a bad boy, she surely would not have chosen the stolid, unglamorous Connell. Class in Ireland seldom works that way. (I’m not being gendered; show me a Clongowes graduate dating a camogie player.)

Ultimately, of course, it doesn’t actually matter whether Normal People is believable. A compelling love story is compelling regardless of how grounded it is in reality. The great screen romances, from Romeo and Juliet to Twilight, have always required a degree of suspension of disbelief.

And, as lockdown escapism, Normal People continues to cast a spell. As ever, the acting – mumbling and wonky accents aside – is wonderful. And the costuming is a triumph unto itself. Marianne’s fringe, especially, ought to have its own Instagram account.

True, I’m not sure I ever believed in Jamie and Marianne. The only spark that flickers between the two is when she tries to brain him with a wine bottle. But Edgar-Jones continues to excel as a wounded bird. Mescal, meanwhile, is naturalistic almost to a fault. When he gazes deep into Marianne’s eyes it’s as if he’s hallucinating and imagining himself giving a Sunday Game interview to Marty Morrissey.

A bit like Doctor Who, in other words: Normal People remains generally fantastical yet frequently fabulous too.