Britain prancing on the world stage? You don’t need to tell us. We were pranced upon 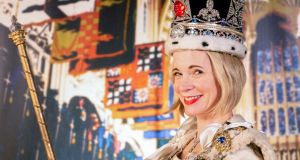 The excellent historian turned historical cosplayer Lucy Worsley is back this week, guiding us through the photographic history of the British royal family while sampling vintage frocks. Lucy Worsley’s Royal Photo Album (Wednesday, BBC Four) is entertainingly educational while also giving Worsley opportunities to dress like Queen Victoria and Queen Elizabeth and play croquet in a feathery hat.

As Worsley points out, the invention of photography came at a point when monarchs reigned rather than ruled, and this needed to be subtly expressed in their public image. To understand the difference between reigning and ruling, contemplate a baby in the back of a car, superciliously dominating a fake steering wheel. That baby isn’t ruling that car, she’s reigning it. The fake steering wheels of the monarchy are ermine robes and sceptres and crowns and big piles of publicly donated wealth. From the late 19th century to today, the royals and their handlers have walked a tricky line, trying to make them appear both coolly other-worldly and warmly relatable.

Worsley starts with Cecil Beaton’s coronation portrait of Queen Elizabeth, taken in an era when Britain was trying to show “it could still prance proudly upon the world stage”. And prance they did, as many pranced-upon nations will testify. Beaton’s royal portrait was influenced by royal oil paintings of old that set out to idealise and downplay any horns, tusks or trunks that came as a legacy of the narrow regal gene pool.

Victoria and Albert were first to embrace the new-fangled technology of photography, and they struck stiff, awkward poses that were printed on collectible cards. (Worsley shows how even then they found ways to remove double chins and expansive waistlines.) Victoria’s daughter-in-law Alexandra was a photographic hobbyist herself, and she left a collection of sweetly candid shots of her family that Worsley suggests were a consolation for being ignored by her philandering-monarch husband.

The philanderer’s son George V reigned in an era of burgeoning monarchy-murdering revolution, and so his advisers invented the meet-and-greet photo opportunity still popular today. To paraphrase their pitch to him: “Perhaps the proles won’t murder you if you pretend to give a s**t about them.”

The paparazzi entered their lives during the reign of the fascist-friendly Edward VIII, at the outset of his relationship with the divorcee Wallis Simpson, for whom he abdicated the throne. Then his brother George VI “humanised” the monarchy, with photographs of them being casual around the palace, and with world-class photographers conveniently to hand.

Worsley also notes the royals who branched out on their own, photographically speaking, like Princesses Margaret and Diana, who courted (literally in Margaret’s case) photographers to tell their personal stories via the medium of the photo op.

It’s all fascinating but a little alien here in Ireland, where our political betters embrace footage of themselves being carried around counting centres bellowing in crumpled suits. Look at him, the big red-faced eejit, he’s just like one of us, we think, which is exactly what they’re going for. That’s republicanism for you. But wait until the pandemic is over and we start an empire.

10 Welcome to the child sex capital of Europe