TV review: And it’s not Bernard’s fault he is but mortal while Marty’s an earthbound angel 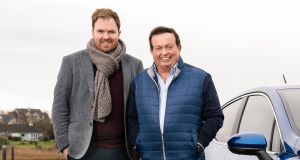 On the road again: Bernard O’Shea and Marty Morrissey

Marty & Bernard: On the Road Again (Wednesday, RTÉ One) sees the RTÉ funnyman (one word, no hyphen) Bernard O’Shea taking the RTÉ funny man (two words) Marty Morrissey around the country as though he were a sacred relic. This is very like the 1980s drama Highway to Heaven, with Bernard in the regular-schmuck role to Marty’s earthbound angel, as the latter performs miracles on the populace. It’s not Bernard’s fault he is but a mortal man.

This is Normal People-level erotica for a lot of viewers, and I rewind and watch it again a few times.

Marty and Bernard start by playing football with the women. Marty’s team win, and he does a cancan with his team-mates. Like I said: er-ot-ic-a

Anyway, this week God tells Marty to go visit the Gaelic4Mothers&Others football club, or Gaa for Mas, in Ballybough in Dublin. “There’s something about you and gangs of women, isn’t there?” says Bernard. “I’m very happy in those kinds of situations,” says Marty, and once more we are sucked into his pale-blue eyes.

The core idea behind the show is that the duo get to know the members of this group and then come up with a way of helping them to raise funds. They start by playing football with them. Marty’s team win, and he does a cancan with his team-mates. Like I said: er-ot-ic-a.

The duo then go from house to house, meeting these warm, funny women individually and learning about their friendships, the tragedies in their lives and the issues facing their community. They have a night out at which Marty does a bum-waggling dance and Bernard sings a karaoke version of Night Fever. To paraphrase Ronald Reagan, the most terrifying words in the English language are, “I’m from RTÉ, and I’m here to help.”

Eventually the duo land on their big idea. They will help the women by getting them all to bake 1,001 cupcakes, which they will sell to punters at a big match in Croke Park. You’d want to be a real grouch, on seeing Bernard and Marty’s happy little faces, to observe that this is really the women helping themselves with Bernard and Marty watching, so we just go with it.

Bernard’s cake is fine, but it only represents him symbolically. It’s clear from the start that there’s a hint of transubstantiation about Marty’s cake

Bernard and Marty get the women to bake several cupcake selections and road-test them for quality at a nearby shopping centre. Finally, two cupcakes are chosen, a Bernard-themed carrot cake and a Marty-themed chocolate cake.

Bernard’s cake is fine, but it only represents him symbolically. It’s clear from the start that there’s a hint of transubstantiation about Marty’s cake. He doesn’t quite say, “This is my body, which I have given up for you,” but he does say, “You can get a cake with Bernard O’Shea’s face on it or you have a chance to eat me up as well.”

The hordes at Croke Park can certainly read between the lines, and they devour his cake and the salvation it brings. On the other hand, the slightly smaller numbers of people who buy Bernard’s cake read The Irish Times, wear tweed and like to make jam. “They all munched on Marty; his party is over,” says one woman, a little sadly.

“Where are we off to next, Bernard?” asks Marty after they bid a fond farewell to the Gaa for Mas women.

Seamus Heaney, our dad the poet, by Catherine, Chris and Mick Heaney
9