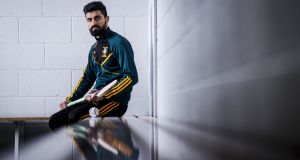 “The GAA, it means a lot to me. All the friends I made, through primary school, it was through the GAA. I was one of them, I wasn’t left out when they were playing.”

Zak Moradi is talking about becoming Irish, after he moved here when he was 11 with his family. His Kurdish-Iranian parents fled Iran and spent 22 years in an Iraqi refugee camp in Ramadi, where he was born, before making it to Leitrim. There we see the now 29-year-old talented hurler score for Leitrim when they won the 2019 Lory Meagher Cup against Lancashire.

Elinor Lyon, from Britain, became Irish through love – for her husband, Galwayman Luke Murphy – and following disbelief and shock about the Brexit vote. “I emailed an enquiry about becoming a citizen the day after.”

Carlos Gonzalez’s idyllic childhood in Venezuela was shattered by violence that “changed the way you look at your life”, and his family fled. Gonzalez, a dancer, lives in Ireland.

We meet all three – engaging and articulate – in Becoming Irish (RTE 1, Monday), a documentary following them in their new lives, on contrasting paths to Irishness. All have applied for citizenship.

Shot before world upheaval that has altered our conception of home, community and safety, the opening scene is unintentionally nostalgic. It takes place in a barbershop, where Moradi is having a haircut (“any plans for the weekend?” “I’ve a hurling championship match”).

“Citizenship will allow me to be free,” says Gonzalez, who discovered dance, and also found there are different ways to be gay than the preconceptions he brought from home. “I was exposed to a different story, so I did have a journey of self-discovery that opened the doors to the outside world.”

Lyon’s parents talk about the possibility of grandchildren with Irish accents, and how they’re proud and pleased their daughter wants to be an Irish citizen. “Elinor’s generation, and Elinor in particular, has always been European, and that’s what she’s embracing.”

The path to citizenship seems a longer process for the non-Europeans. In the meantime Moradi, gone native with an accent mixing Leitrim and Dublin, is effectively stateless, and has to apply for a visa to play in Tyrone.

Gonzalez ponders what would happen in a family emergency, as he juggles citizenship without a Venezuelan passport. “It’s a waiting game,” he says,

It’s striking how each, while embracing a new nationality, also holds on to where they are from, an instinct familiar to Irish people who have made new homes while retraining their Irishness. The footage echoes that sense of where they came from, as well as their new lives here.

In this beautifully crafted documentary, produced and directed by Emmet McCarthy, there’s added poignancy when we know that citizenship ceremonies are on hold, while the importance of belonging has ever more resonance.

Lyon and Murphy’s gently loving story has moments of humour. When he first brought her home to the farm in Co Galway, she recalls “his mother rang her sister to say ‘Luke’s home and he’s brought a woman with him. Do you want to come down and have a look at her?’ I mean, like, to my face!”

She must have passed the test.

‘Conor McGregor is an inspiration. There’s a severe vulnerability to him’
8

Speak out against wrongdoing in an Irish workplace, and here is what happens
9

Netflix: 10 of the best new shows and films to watch in September
Real news has value SUBSCRIBE