A new Netflix documentary takes a detailed look at the disappearance of 3-year-old Madeleine McCann, who vanished while on holiday with her family in Portugal. Video: Netflix 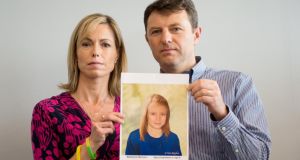 Kate and Gerry McCann hold up a police image of Madeleine. They are not involved in the Netflix show. Photograph: Leon Neal/AFP/Getty

Netflix today released its long-awaited big-budget documentary series on the disappearance of Madeleine McCann, despite opposition from the missing child’s family and TV-industry speculation that programme-makers failed to gain access to the key individuals involved in the case.

The US streaming service first commissioned the programme in 2017, amid the explosion of interest in true-crime and cold-case programmes following the success of Making a Murderer. But despite spending enormous sums to produce eight hour-long episodes, its release has been repeatedly delayed, raising speculation about what, if anything, the show has uncovered and the state of behind-the-scenes wranglings over the show’s content.

Kate and Gerry McCann, whose daughter went missing in 2007, when she was three, while on holiday in the Portuguese town of Praia da Luz, have repeatedly refused to take part in the show. They have also urged those around them to resist efforts by Pulse Films, the London-based company that has made the show on behalf of Netflix, to give an interview.

Clarence Mitchell, the family’s former spokesperson, who still assists with media inquiries, says: “Kate and Gerry and their wider family and friends were approached some months ago to participate in the documentary. Kate and Gerry didn’t ask for it and don’t see how it will help the search for Maddie on a practical level, so they chose not to engage.”

Instead the programme has interviewed the Portuguese officials who originally investigated the case, many of whom have since established media careers discussing the incident.

Two years later the production staff are thought to have interviewed more than 40 individuals, although some leading British journalists who covered the story at the time have said they declined to take part.

Those who are thought to have given interviews include the Portuguese detective Gonçalo Amaral and the journalists Anthony Summers and Robbyn Swan, who wrote a book on the case. Others include people questioned by the Portuguese police, such as the Briton Robert Murat and the Russian Sergey Malinka, plus the child-protection experts Jim Gamble and Ernie Allan.

Some associates of the McCanns did take part. Brian Kennedy, the millionaire businessman who helped fund the initial search for Madeleine, has also talked to the show.

The McCanns themselves have kept a lower profile in recent years, being selective in their media appearances. Despite £11.75 million, or €13.75 million, being spent by British police on the search for the missing child, there remains no sign of her after 12 years, although London’s Metropolitan Police has continued to fund Operation Grange until the end of this month.

Earlier this month the programme was listed on Netflix’s new-release schedule for today, only for the show to be removed from the public list. A trailer was released yesterday. Today’s release of the series for streaming concludes a difficult route to screen for a programme that was at some points speculated to have vanished for ever.

In line with Netflix’s secretive style, the show was never formally announced as a commission, aside from speculation in the industry press. The streaming service also has a tendency to drop shows with a minimum of advance publicity, instead relying on the power of its home screen’s algorithm and word-of-mouth publicity to spread awareness of its new shows. However, individuals with knowledge of the production say the trailer was due to have been released last week, only for that to be pulled at the last minute.

British documentary-makers are also looking enviously at the programme’s production values and wondering what Netflix will have to show for its enormous investment, amid speculation that it is heavily reliant on archive footage rather than new material. The show’s executive producer, Emma Cooper, recently left the independent production company, which is owned by Vice, for unknown reasons.

Although the Netflix show is speculated to cost more than €1.1 million for each hour-long episode, the 2017 BBC Panorama documentary Madeleine McCann: Ten Years On is understood to have cost less than €225,000. Netflix declined to comment.

One rival documentary producer said: “There’s been a lot of speculation about the series ever since it was first heard about but particularly since the trailer was delayed. Around 50 people are thought to have been interviewed for it, so it’s taken a while to make and get everything signed off. Although there are eight episodes, it looks as though it is not going to be a big ‘reveal’ kind of show that some were expecting, more of a narrative piece, although apparently some people are talking for the first time in it.”

The McCanns were offered the chance to view the Netflix documentary in advance, although they declined. The family, who are known for keeping a close eye on claims made about them through their lawyers Carter Ruck, are not thought to be considering any legal action at this stage. But British media lawyers pointed out that Netflix documentaries remain available to view for substantial periods of time, meaning the risk of libel damages could be higher than with a traditional one-off TV broadcast. – Guardian

Helena Bonham Carter: ‘People choose to sleep with powerful people. I got two children out of it’
5 The extraordinary gentleman
6