The meming of life: Sometimes it would be better if conspiracy theories were true 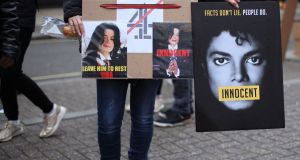 Michael Jackson fans protest outside the headquarters of Channel 4 in London, ahead of the airing of the documentary Leaving Neverland earlier this week. Photograph: Yui Mok/PA Wire

It’s sometimes easier to imagine all the dissenting voices you find online are trolls; a conspiratorial army of dead-eyed, bleeping robo-bores dispatched by some foreign intelligence agency to disagree with your tweet about Game of Thrones, perhaps. Most likely as part of some plot to sow seeds of discord among the population and subvert our society from within. In fairness, cyberattackers’ meddling in events like Brexit and the 2016 American elections have shown that these things can happen. In some cases, the trick is to spread hundreds upon hundreds of messages across made-up accounts to give the sense of a huge wellspring of support for your stated topic, such as the Israeli “Hasbara” network that operates thousands of sock-puppet accounts that tweet praise about the country’s governments and its diplomatic aims.

But sometimes it’s hard to know if you can blame something on some form of top-down instruction. Such is the case if you follow the reaction to the recently aired documentary Leaving Neverland. The film, which was broadcast on both sides of the Atlantic this week, makes compelling accusations that Michael Jackson was a serial sexual abuser of young boys, and used his access to children to commit abuse on a bewildering scale. All of this makes for harrowing viewing. So too does the hashtag, #LeavingNeverland, which has now become near unanimously populated with people tweeting angry, caustic and threatening slander at the film and its subjects.

“Lying money-grabbing bastard!!!” wrote one enraged fan, “beggers”, “cheats”, “proven liars”, “why try ruin the reputation of a legend” screamed others. Not that these slanders are limited to obscure fans either. “Unpopular opinion” wrote blue-ticked Welsh social star Jordan Coombe “but this #LeavingNeverland Michael Jackson documentary is complete bullshit. Imagine the amount of money these ‘victims’ have been paid to lie.”

To be clear, it behoves anyone to treat allegations as just that and there are, of course, valid reasons to remain clear-eyed and open-minded about any horrible claim made about anyone. But few of these reasons have much to do with an artist’s worth, or the presumption that payment is the motivating factor behind someone claiming child abuse. And these objections are likely best made with a sober appreciation that you probably don’t have all the facts of the case yourself. The thousands of expletive-laden rants from Michael Jackson fans that have littered the web for the past week don’t fall into that latter category.

One horror of conspiracy theories is that sometimes it would be better if they were true. Instead, the internet shows a more horrifying sight than an army of bots; an army of living, breathing humans, driven to such ugliness in the name of the things they love.