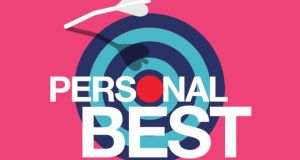 Personal Best: this is a show with a big, golden heart

Trying is the key word on Personal Best: the podcast’s two hosts, Rob Norman and Andrew Norton, are trying to help solve people’s problems. Their method of trying is indirect, but strangely gorgeous.

Brent, the subject of episode one, would like to be in a room where balloons fall from the ceiling. It’s a childhood dream of his, to be in a balloon drop. Brent plays bass in a punk band, and works as a radio announcer. He’s not much of a guy for celebrations, but harbours this secret and long-burning desire to stand amid thousands of falling balloons. Norman and Norton are here to help make that happen, and take a look into exactly why he wants such a specific and unusual thing so badly.

At the end of the gameshows of Brent’s childhood, balloons would fall on the studio in celebration. The core of this conversation is about self-esteem and when, if ever, is it appropriate to celebrate? Brent is heavily concerned with the moderation of excitement and how, if you don’t ever get too into anything, you don’t ever get disappointed. This chat with Brent is quite heavy but not handled in a way that feels grim. Norman and Norton’s hosting is so buoyant and optimistic that we are happy to be carried through this absurd quest to experience a balloon drop, littered with interviews and explorations of what it is to celebrate.

The hosts talk to an actual celebrant about what it takes to incite a celebration – and take a sociological look at what happens to us if we don’t stop to raise a glass every now and then, and why we really, really should. They also decide they want to interview the writers of the iconic party song Celebration – Kool and the Gang, but (relatively obviously) could not secure them for interview. Instead, they secure a chat with the singer from a cover group, Kool As The Gang, who talks them through what it takes to make a song that lifts people into celebration. They have decided, by this point, to write Brent a song about celebrating.

The query that runs through these interviews and conversations is, why can’t people celebrate? What stops people from giving in to, and expressing, joy or relief when things go well? These are big questions handled with incredible lightness and playfulness. By the midpoint of the episode, things are spiralling away from the original balloon drop conversation, but because of all the raw charm and charisma of the hosts – most especially their earnestness – listeners will without doubt be willing to follow them from celebration tangent to celebration tangent. Narratively, it’s an uncommon feeling to realise, halfway through an episode, that you have no idea how this story is going to end. This is excellent storytelling by any podcast’s standards.

A highlight of the episode is the segment where in Norman and Norton make the hesitant Brent call his friends and family to tell them that he’s going to buy a new pair of shoes because he’s a good person, and he deserves them. The snippets into these conversations are hilarious, not uncomfortable – everyone participating is game in a way that makes for unusually goodhearted listening. The song that gets written for Brent encapsulates this sentiment well – it is bizarre, sure – but with surprising moments of tenderness.

This podcast is a perfect example of kind media. It feels like a late night MTV television show from the mid 1990s – part documentary, part social experiment – but void of any kind of cynicism. This is a show with a big, golden heart.