Picnic at Hanging Rock gets a gutsy 21st-century makeover

‘I don’t want to be elegant,’ complains one of the girls. Nor, admirably, does the show 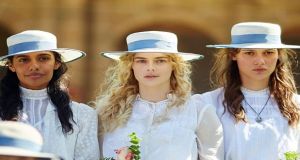 Much has been made of some of the unconventional casting decisions behind a new adaptation of Picnic at Hanging Rock (BBC Two, Wednesday, 9.05pm). First and foremost, it reconceives of the strict governess of a Victorian-era Australian finishing school not as a fusty old disciplinarian, but, in Natalie Dormer’s tingling performance, as someone much younger, pronouncedly feline and utterly duplicitous, recreating herself before our very eyes.

Among her porcelain charges are now some more diverse faces, where the four girls who stray from a Valentine’s Day picnic in 1900 and never return, are at once more spirited in Lily Sullivan’s proud Miranda, more luminescent in Samara Weaving’s haughty Irma, and more flinty in Madeleine Madden’s indigenous Marion.

But the boldest bit of casting actually involves the return of an original performer, who first appeared to supernatural effect in Peter Weir’s celebrated 1975 film version, and could only ever play itself: Mount Diogenes, or the Hanging Rock, a jagged eruption of brutal natural beauty.

“I must warn you, the rock is extremely dangerous and therefore you are forbidden from engaging in any tomboy foolishness in its exploration,” Dormer’s Mrs Appleyard instructs the girls, who otherwise while away the hours perfecting their posture, their Christianity and submissiveness for the benefit of future husbands. Frankly, who wouldn’t choose the rock?

The book’s author, Joan Lindsay, always knew it was a forbidding and sensuous metaphor for the anxieties of both colonialism and sexuality: the things that might erupt or revolt and subsume fragile civility at any given moment.

Director Larysa Kondracki uses her camera in much the same way. We advance through tangles of branches, reaching out like grasping limbs, through enveloping folds of rock, or across dreamlike clearings, crawling with insects.

The new show addresses awakenings in its own terms. Just before Miranda disappears, her French teacher still likens her to “a Botticelli angel”, but now she flicks her tongue in response like a serpent. In this version the homoeroticism between Harrison Gilbertson’s precious member of the gentry Micheal and Philip Quast’s earthy Aussie, Arthur, is more palpable.

And while everyone fidgets under an identity that doesn’t fit comfortably, Appleyard also endures the pressures of pretence, her cockney accent slipping out in voiceovers and flashbacks (“’Ere it is, then,” she sighs. “Retribution.”)

The show, on the other hand, is straining for an identity of its own; the camera angles, the vibrant colour scheme, the percussive, synth-daubed soundtrack and throwback intertitles all have the nostalgic style of an Instagram filter.

“I don’t want to be elegant,” complains one of the girls, and nor, admirably, does the show. Written and directed by women artists, moreover, it shakes the story loose from Weir’s preferred restrictive frames, all mirrors and corsets, for a hazy, gossamer, artfully considered effect somewhere between Sophia Coppola and Wonderland.

There they go again, the precious darlings, disappearing into the supernaturally rugged terrain of the bush, “just for a little while”. Who can help it? It’s in our nature.