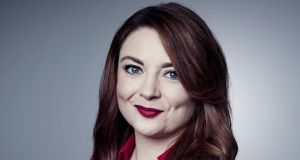 Samantha Barry: Glamour’s new editor-in-chief has worked for RTÉ and Newstalk and was most recently an executive producer at CNN Worldwide. Photograph: CNN

When Samantha Barry was growing up she and her family would gather around the television to watch the six o’clock news on RTÉ. They also told stories around the dinner table and read a number of newspapers and magazines, including Vogue and old issues of Time. “Irish people are such storytellers,” Barry says. And “the ’80s in Ireland was an interesting time for stories.”

Barry, who is originally from Ballincollig, in Co Cork, has continued to tell stories from places as varied as New York and Papua New Guinea in a career that has included stops at RTÉ, the BBC and CNN. And so, although she has never worked at a magazine, Barry had no qualms about the job she is about to undertake: Condé Nast has named her the next editor-in-chief of Glamour.

When she assumes her post next week, Barry, who was most recently an executive producer at CNN Worldwide, will become the eighth editor of the women’s title since its founding, in 1939, and the first person with an exclusively digital and television background to lead a Condé Nast magazine. She will succeed Cindi Leive, who said in September that she was leaving the magazine after 16 years at its helm.

Both Barry, who is 36, and the company that hired her are aware that she may be perceived as an atypical choice for the job. But with her appointment Condé Nast is signalling, once again, that it is barrelling headlong into the digital age – if as much to reach its screen-obsessed consumers as by the financial realities of the magazine industry.

Anna Wintour, editor-in-chief of Vogue and Condé Nast’s artistic director, called Barry “fearless like so many leaders of the moment”. “We recognised at once that Sam would be the perfect editor for a new, more ambitious era of Glamour’s future,” she said in a statement. “We cannot wait to see her vision unfold.”

Last year Condé Nast brought in $100 million, or €83.5 million, less in revenue than it had in 2016, according to a person briefed on the company’s finances. Its editors, as a result, have been asked to do more with less.

The company has reduced the print frequency of titles including GQ, Architectural Digest and Glamour, which it cut from 12 issues a year to 11, and shuttered the print edition of Teen Vogue. It has also restructured its sales and production teams and cut employees.

At the same time the company has broadened its digital footprint, with sites like Vanity Fair’s Hive, a hub for culture and politics, and Healthyish, which is focused on nutritious recipes. In October the company introduced a site devoted to gay, lesbian, bisexual and transgender issues, “them”.

Started by Condé Nast (the man himself) and originally called Glamour of Hollywood, Glamour has won numerous US National Magazine Awards, including magazine of the year in 2010.

Although it has not shied away from covering fashion, beauty and celebrity culture, the magazine has also transcended the frivolity sometimes associated with women’s magazines by reporting on politics, feminism, sexual health, abortion and rape. In 2016 Glamour endorsed a presidential candidate for the first time in its long history, when Leive backed Hillary Clinton in a piece headlined “In this election, I’m with her”. That year it also published an essay by Barack Obama titled “This is what a feminist looks like”.

Like many similar publications, Glamour has expanded far beyond its glossy pages. The magazine’s website now has more than 11 million unique monthly visitors and some 15 million followers on its social-media platforms.

“Under Cindi’s leadership, Glamour has become a beacon for American women like those who have fought so bravely to be heard this year – brilliant, entrepreneurial, a force for change, generous and of course, always stylish,” Wintour said.

But while Glamour is still a dependable generator of revenue for Condé Nast, with a total circulation of more than two million, its news-stand sales have fallen sharply since 2014, from more than 200,000 to less than 100,000.

In selecting Barry, Condé Nast is charting a future for Glamour, and the company as a whole, that is far less dependent on print. But the magazine still exists, and editing it is still part of the job description. “At the end of the day I bring to the table being an expert in content,” Barry says. “I also bring to the table the ability to pivot.”

And what about print? “I care about the brand, and the magazine is a huge part of that brand.” But, she added, “Glamour is a brand – it’s not just a magazine.” – New York Times

TV guide: 23 of the best shows to watch this week
2

Steve Wall on his family’s tragedy: ‘It was a year from hell’
8