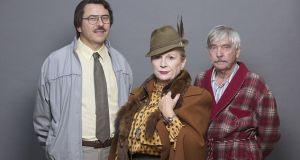 Grandpa’s Great Escape (BBC One, Monday, 6.55pm), an adaptation of one of David Walliams’s highly successful children’s books, is an elaborate kind of memory game.

It is the story of a boy and his grandfather, unlikely best friends, where the older man becomes moithered by Alzheimer’s, lost in his memories as a World War II spitfire pilot. The boy, Jack, indulges these fantasies in a spirit of make-believe: “Roger that, Wing Commander!”

For the rest of the family, all of them shades of caricature, Grandpa’s confusion is no joke: “He’s got worse,” goes a frequent refrain. But set in a new-romantic, comic-book saturated idea of the 1980s, the show is also lost in memories – those of the boy, and, you suspect, Walliams’ childhood. That makes for a double bracketed nostalgia, giving us Jack’s memories of his grandfather’s memories: the Greatest Generation as seen through the eyes of Generation X.

The fantasy of the television adaptation, by Walliams and Kevin Cecil, is to have them meet mid-way. Grandpa (the great Tom Courtenay) is discovered sitting on a church roof, silhouetted by a paper moon, still gunning down Jerry in his mind. Persuaded by a spivvy vicar (nicely overplayed by Jennifer Saunders) to move to the shady Twilight Towers nursing home, Grandpa may as well be in Colditz and so Jack assists in a daring escape. “Why not let him have one final flight?” suggests the kindly shopkeeper Raj (Harish Patel), with a child’s answer to a grown-up dilemma, and you get the sense that Walliams also prefers to lift everything from the runway of reality.

That’s understandably sweet. It’s much more reassuring to wage battle against a comically villainous nursing home staff, led by a tyrannical Saunders in an Alpine Hat, than to deal with Grandpa’s mental and physical decline. Director Elliot Hergarty corresponds with the weightlessness of a Hanna-Barbera cartoon, all skidding stops, scattered marbles and mannequin disguises.

But Courteney, as Grandpa, injects the frivolity of the caper with something subtly and painfully real. He can lift Walliams’ jokes with an expertly light touch and snap to attention - ramrod straight - when ordered, but still allows a soft hesitancy in his voice, a dart of uncertainty in his eyes. Like Grandpa’s adventure, the show is determinedly escapist, preferring to keep its memories comforting and warm. But Courteney doesn’t forget about reality, or the wars within.