The Apprentice: Alan Sugar is trapped in a meeting that will never end

Stuck in a purgatory of his own making, even his putdowns are starting to sound shop-worn 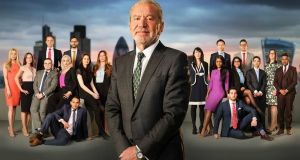 Now, in this 13th season, Alan Sugar’s punctured features have clenched into a permanent grimace.

Lord Shuggs is tired. With every passing series of The Apprentice his face has grown more curved and inward-looking. Now, in this 13th season, his punctured features have clenched into a permanent grimace after years of listening to plucky young things spout the worst kind of nonsense.

Like the Anna Wintour of the business world, he has seen trends come and go but is trapped in a purgatory of his own making, a meeting that will never end. Even his scathing put-downs are beginning to sound shop-worn. “You’re about as useful as a fur coat in a sauna,” he spits in exasperation at one point to gormless “hunk” Harrison Jones.

It’s week 10, the final task before the excruciatingly brutal series of interviews where the remaining contestants go through their business plans and are interrogated about their cupcake companies and dog-walking apps as if being accused of various unsolved murders across the UK.

The teams must work on a ludicrous fashion challenge whereby they become “agents” who must select a designer, plan and organise a catwalk show and also create a magazine cover to supplement their sales campaign. Basically it’s an opportunity to stitch up the shiny-suited corporate stooges: not only must they judge what is fashionable, they also have to invent a new lexicon of risible rubbish to appease the pretentious fashion crowd.

This had all the potential for unhinged florist Elizabeth to continue in her role as a Women’s Institute member from 1945 attempting to adjust to modern life. Alas, Sugar’s harsh words from last week saw Elizabeth dial down her eccentricities to “wine-drunk aunt” levels. Disturbing drooling over male models is her only notable contribution.

It is up to the men of the opposing teams to provide the real fashion faux-pas. There is loaf-headed Harrison fumbling through rails of avant-garde designer gear wearing an expression of fear, genuinely flummoxed at the idea that women’s clothing could come in shapes other than slinky body-con attire. As he goes from item to item, describing one silver jacket as “the thing paramedics put over you” it all becomes overwhelming for the poor love, who then spends the rest of the task arranging chairs like an embarrassed, redundant dad at a 21st.

Meanwhile, over on Team Graphene, ruddy-cheeked choirboy James White takes to the challenge with gusto, even offering himself up to become a model where for some unknown reason he tries to transform himself into Mark Owen circa 1992. Standing in prayer mode, shirt flapping around him, 1990s curtains haircut intact, he looks less like the Take That heart-throb and more of an “amateur magician”, according to the magazine bigwigs.

In the boardroom Sugar puts it more bluntly: “You look constipated.” Without any phones to chuck in a Naomi Campbell rage, it’s left to that inflamed face to say it all. Like a classic Chanel handbag, Shuggs’s vexed visage will never go out of style.