Senator David Norris speaks about his restored Georgian home on Dublin's North Great George's Street, which has been crowned Celebrity Home of the Year. Video: RTÉ 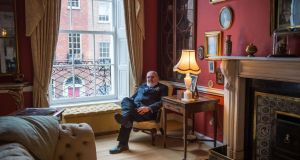 David Norris in one of the reception rooms of his restored Georgian home. Norris was the winner of Celebrity Home of the Year 2017. Photograph: Ruth Medjber

Some time ago a Danish TV company hit upon an interesting idea: that if you can have contests for everything from singing and baking to modelling and robot demolition, there’s no reason you can’t be competitive with living spaces.

Home of the Year quickly became an international franchise, but it always held a particular attraction for Ireland, where snooping through the kitchens, living rooms and bathroom cabinets of your neighbours (and judging them accordingly) is a proud national pastime. Why not nose though these well-appointed dwellings from the comfort of your own unsightly hovel?

To introduce celebrity into this mix, however, clearly upsets the balance, or, if you prefer, unsettles the feng shui. Celebrities, by definition, require unnatural degrees of approbation, and programmes that require the participation of celebrities swaddle them with unnatural degrees of obsequiousness.

This creates the strange sensation on Celebrity Home of the Year (RTÉ One, Tues, 9.35pm) that the three judges are considerably more worried about how they come across than the houses. The completion is in who can sing their praises the loudest. The “homeowners”, as they dutifully call them, will be watching.

It’s hard to imagine a more touching picture of self-consciousness, as they clasp their hands protectively, speak with such expansive, melon-juggling gestures, repeat the same superlatives so frequently that the words become radically devalued.

“I love the natural light,” says designer Deirdre Whelan of writer Melissa Hill’s renovated bungalow.  “I absolutely love it,” says the permanently enthusiastic architect Patrick Bradley of the high ceilings and sash windows and cornicing in David Norris’s restored Georgian home. “I love the idea of ‘Love’,” says Hugh Wallace, standing in the living room of 2fm presenter Eoghan McDermott, with a surrealism only slightly mitigated by the fact that the word is spelled out in front of him as a table ornament.

The ruse of anonymity and unprejudiced critique is blown apart early and often. Author Melissa Hill possesses a library-worth of her own fiction, often displayed face front like an Eason’s shelf. Senator David Norris admits that his charmingly cluttered walls boast 17 painted portraits of him. And rugby player Mike Ross gamely concedes that if the innumerable images of his prowess on the rugby pitch don’t give him away, “They’ll think I’m the world’s biggest stalker.”

Given the scale of intimidation, you have to admire Whelan’s temerity when she turns her attention to her pet subject: table provision. She finds Hill’s dining table “a bit mean”, dislikes Ross’s bulky coffee table, and criticises McDermott for not even having one. This table talk is hard to counter. But otherwise there is so much apple-polishing accord that when Bradley and Wallace disagree about the best location for Ross’s bedroom, the coldness in Bradley’s fixed smile feels almost violent.

Despite encomiums about personality, creativity and originality, it’s hard not to take this as a lavish admiration of wealth. TV presenter Lorraine Keane and her husband acquired eight apartments to restore their South Dublin seaside terrace. And while the judges are iffy on one living room, they’re impressed with the formal dining room upstairs, heaping the word “glamorous” and “girly” over a shoe collection to rival that of Imelda Marcos, while praising its lack of conspicuous televisions and making no mention of several Graham Knuttel paintings.

The winner, to nobody’s surprise, is David Norris’s five-floor home. Its owner has the wit to acknowledge the discrepancy between this promenade through property fetishism and the current housing crisis by donating half of his winnings to Focus Ireland. “His home is just an extension of his personality,” fawns one of the judges. Norris, clearly aware of those less fortunate, is lucky to have one.