Must-listen podcasts: from eclipse chasers to architecture’s sleight of hand 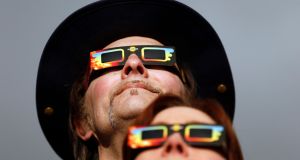 A production of Gimlet Media and hosted by Flora Lichtman, this episode opens curiously on a set of phonecalls between Lichtman and hotel owners across Jackson, Wyoming. Each hotel is full for the date she’s asking after, one is even booked out three years in advance – the reason being, the night in question is a solar eclipse. They happen every 18 months somewhere on the planet, and there is a population of folks who seek out these lunar events. Lichtman goes on to explore the gorgeous and strange world of “Eclipse Chasers”: people who are dedicated to bearing witness to the eclipse. Lichtman chats to one of these chasers, and the ensuing conversation is both scientific and kind of revelatory. This episode is almost enough to get you gazing at lunar charts and booking flights to see the phenomenon yourself – and at 22 minutes it’s a short, sharp trip to somewhere celestial and exciting.

One podcasting’s classic series, Roman Mars looks at the sleight of hand that architecture and design uses, just beyond our field of vision, in the world around us. The intended but almost unseeable thought put into how things are built and presented to us is fascinating – and this episode is a great introduction to the series. It explores the legacy of the Winchester family, a rifle legacy family in America. In barely 17 minutes, we explore a haunting true story about superstition and how it bred in Sarah Winchester after the deaths of many members of her family. A medium inferred to Winchester that every person killed by one of the family’s firearms would haunt her for the rest of her days – unless she built a neverending house, which would ultimately grant her immortality. All of this is true – the house still stands today. This is a brilliantly produced, factual but still quite jarring exploration of a truly haunted house: and the downfall of both the architecture, and Sarah Winchester herself. Historians and archive audio here alongside the crisp, no-nonsense narration is very refreshing. A close look at one of the true anomalies of architecture, and the heartbreaking story behind it.

A home-grown audio-comedy, starring comic Conor O’Toole, about the crew of the LE Scholar, a ship running off the coast of Sligo. It opens with a catchy, tongue-in-cheek theme song which took me utterly by surprise and sets the scene for a warm and brilliantly weird little series. Each role is played with sincerity, enough that it feels a bit like The Life Aquatic on air, but also playfully enough that things don’t get too dry.

It feels like it might be from a different time of radio comedy, replete with neatly timed vocal effects (keep an ear out for Mr McCabe tuning in and out) – there’s a little bit of the original Hitchhiker’s Guide To The Galaxy radio show about it: the form lends itself perfectly to weird happenings and escapism, and the sound design really provides for that.

This pilot episode involves an adventure into Rockall, a subterranean 1960s Irish town (it doesn’t have motor vehicles, or Spars, but it does have hipsters) – and features Tara Flynn as the Postmistress, who’s sincerity in her slightly terrifying role is very, very funny. Here’s hoping that the three brief episodes currently online aren’t the only adventures of the Scholar that we get to listen in to.