Marty in the Shed: Flirty rascal Marty Morrissey steams up the RTÉ Player 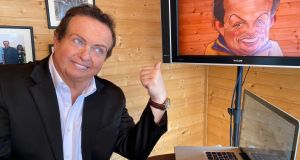 Marty in the Shed (RTÉ Player) might be a modest enough production, with all expenses spared, but there’s nothing humble about its opening credits, with the Morrissey man’s head superimposed on: a beefily built person wearing a Hawaiian shirt, a Clare hurler, Superman, a scuba diver, a Kiss guitarist, a surgeon, a construction worker, John Travolta and a cowboy.

These are probably all the things Marty told his career-guidance teacher he wanted to be when he grew up.

Marty’s shed is kind of a shrine to Marty, having the look of a place that contained a sunbed and sauna pre-lockdown, before they were replaced by laptops and a big telly so he could do his show

Instead he’s a broadcaster helping us through the pandemic with a chatshow in a shed in the corner of his west Clare back garden, where he has a larger-than-lifesize cardboard cut-out of himself and a framed montage of photos of him gyrating on Dancing with the Stars.

Marty’s shed, then, is kind of a shrine to Marty, having the look of a place that contained a sunbed and a sauna pre-lockdown, before they were replaced by two laptops and a big telly so that he could do his show.

Marty moves so close to the camera you can see his nostril hairs, says “love you loads” and sends Ksenia some smouldering smooches. Some of us don’t know where to look

Then Ksenia tests Marty to see if he remembers his moves from Dancing with the Stars, a show he appeared on two years ago, and you worry that if it were a flat-pack shed it would fall apart from the violence of his cha-cha-cha. Alas, he has largely forgotten his moves, so he tells Ksenia that, as soon as he is able to, he’ll visit her in London so they can practise. Then he moves so close to the camera you can see his nostril hairs, says “love you loads” and sends Ksenia some smouldering smooches. Some of us don’t know where to look.

Among his other guests are the Mayo footballer Aidan O’Shea and Aidan’s girlfriend, Kristin McKenzie Vass. Marty is especially excited to meet Kristin, telling Aidan he is free to leave. He’s such a flirty rascal. Aidan and Kristin then dance in their sitting room to the theme of Mission: Impossible, their routine largely involving Kristin climbing up and down Aidan like he was Carrauntoohil. By now steam is coming out of the RTÉ Player. Or maybe it is from Marty.

Then we have the broadcaster and former camogie star Anna Geary and her newish husband, Kevin Sexton. After a quick chat, Marty wishes the couple well.

“Nice to have had you in the shed,” he says. “I’ve always wanted to say that: I’ve had Anna Geary in the shed!” Jesus, Marty! “With her husband!” Anna and Kevin disappear, seemingly not up for Marty’s Menage a Trois. In the Shed.