Reality TV: Are Kristin Cavallari and Jay Cutler trying to outdo each other in unpleasantness? 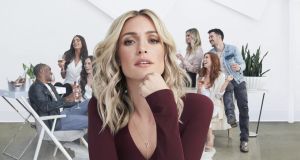 Very Cavallari: the show is reminiscent of Dash Dolls, the ill-fated Kardashian spin-off about the staff of the sisters’ Hollywood boutique. Photograph: E!

Long before the Kardashian clan and their Calabasas Camelot there was the vacant gloss of MTV’s Laguna Beach, billed as a real-life look at the young, impossibly perfect inhabitants of Orange County. It was like an Abercrombie & Fitch ad directed by Sofia Coppola. Gathering together a gang of school leavers, including preppy Lauren Conrad, a pre-surgery Heidi Montag, Brody Jenner and Kristin Cavallari, Laguna Beach and its spin-off The Hills gave reality television a sophisticated makeover that left it virtually unrecognisable.

Cavallari came across as the series’ resident bitch. The she-wolf of Laguna Beach, she spat well-timed barbs and rolled her eyes at the other girls’ hormonal hysterics. Such casting helped to make the shows the most influential of their kind – as did the kind of cinematography usually reserved for highbrow indie films. The fly-on-the-wall cheapness and crass comedy of The Osbournes and the grubbiness of the Hugh Hefner vehicle The Girls Next Door were no match for the melodramatic solemnity with which the MTV shows treated their teen subjects, where every flick of the hair was loaded with meaning.

But after five years of faultlessness The Hills spiralled out of control as it focused on one couple, Heidi and Spencer, and their increasingly bizarre antics, from their circus-event wedding to Heidi’s plastic surgery and Spencer’s conspiracy-theory breakdown – he spent episodes smashing crystals against his head as he spouted garbled rubbish about 9/11 and UFOs.

Now Cavallari is back. After attempting to monetise her life by investing in clothing lines, cookery books and a jewellery range, she has been tempted back into the spotlight by E! for her new show, Very Cavallari. This should be a welcome return for the spirited blonde – but the series is painful to watch. Being at the centre of the show instead of being merely a memorable bit player, she finally has the chance to blossom into a lead, but she’s cold and rigid. Without a foil to spark off, her personality fails to ignite; instead her rictus grin feels like it will slash the screen.

The show, which tracks the opening of her first shop in Nashville – part of her Uncommon James fashion “empire” – is reminiscent of Dash Dolls, the ill-fated Kardashian spin-off about the staff of the sisters’ Hollywood boutique. It feels like the product of another time, an embarrassing relic from the days when these bland reality shows flooded the channels. As with Dash Dolls, few of us want to sit through episodes that dwell on minor characters.

Cavallari’s relationship with her husband, the former quarterback Jay Cutler, is far more intriguing. Cutler spends his unhappy retirement lumbering around the house, leaning against door frames, admonishing Cavallari and unsettling her staff in a menacing, Ray-Liotta-at-the-end-of-Goodfellas kind of way. His only joy seems to come from shooting elks (and monitoring deer on his CCTV while he waits to annihilate them).

His prickly, chilling presence makes you wonder how the series will progress. They come across as an intensely unlikable couple, apparently without humour, affection or warmth. When they insult a waiter who dares to ask how Cutler would like his steak cooked, it is as if they are trying to make careers from being utterly charmless. With Very Cavallari, the California dreams of Laguna Beach and The Hills have morphed into a nightmare.