Review: O’Brien owns a big chunk of the media, and often seems to be suing the rest 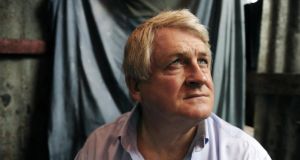 What can you say about Denis O’Brien, “Ireland’s most controversial businessman”? It is not a trivial question. The man has, to put the matter at its very meekest, a complicated relationship with the media. Both a mogul and a “serial litigant”, he owns a considerable chunk of it, in the controlling share of Independent News & Media and five radio stations, and often seems to be suing the rest of it: since 2005 O’Brien has taken 16 cases against the media, including newspapers and individual journalists, at one point threatening action against the Waterford Whispers satirical news site.

You can understand RTÉ’s decision to tread very carefully in Denis O’Brien: The Story So Far (RTÉ One, Wednesday, 9.35pm). I considered getting legal advice before I could watch the ruddy thing.

One reason for such litigiousness, its presenter, the broadcaster’s former business editor David Murphy, tells us, is that O’Brien is “fiercely protective of his reputation”. But such concern for his public image hardly explains that haircut. Apparently formed in boyhood, it may not be the only characteristic to have endured. At university, his friend and former business partner Barry Maloney recalls, O’Brien escaped the consequences of bad behaviour through FDP – a “flat denial policy”. Perhaps it was just a phase.

The documentary, edited in the nervy leaps and soundtrack of an agitated technothriller, provides a careful chronology of O’Brien’s professional career. The Story So Far, then, is mostly a matter of record, reported exhaustively with diligence and scrupulous balance, adding little more. (Over the guts of two hours there’s more than enough just to get straight.) We see O’Brien’s rise from a failed television venture to a successful radio enterprise, before a canny eye for mobile-phone provision leads to his first jackpot.

“The big international companies underestimated the Paddies,” O’Brien says, with characteristic jockishness, when Esat Telecom and Norway’s Telenor bid becomes the surprise success, establishing his telecoms empire. Eventually, he sells his Esat shares for the equivalent of €367 million, by then tax resident in Portugal and beyond the reach of capital-gains tax.

Success seemed to be unceasing, with his staggeringly lucrative foothold in Jamaica, and then throughout the Caribbean, until he was outmanoeuvred by Tony O’Reilly and the Valentia group for the acquisition of Eircom, and then, most notoriously, drawn into the Moriarty tribunal.

The tribunal found that O’Brien paid about €1 million to the former Fine Gael minister for communications Michael Lowry through “clandestine” property deals, and had received information “of significant value and assistance” in securing the mobile-phone licence. It’s remarkable to see Lowry, who sits as an Independent TD for Tipperary, now dismiss the tribunal’s description of his “venal abuse of office” as “lovely flowery language”, as though thinking, perhaps, of a Venus flytrap. O’Brien, who did not participate in the documentary, has always flatly denied this.

The way O’Brien tells it, everything is a fortuitous chain of ‘lucky bounces’, good deals and better times, not the shrewd manoeuvrings of an endlessly litigious billionaire

The documentary attempts a kind of audit of O’Brien’s deeds, while several contributors attempt to guess the motivations behind them. There is his laudable support for the Special Olympics, for instance, hosted by Ireland in 2003, and the immense philanthropic work of his company Digicel building schools and rebuilding infrastructure in a battered Haiti.

Then there is the immensely favourable deal he struck with the Irish Bank Resolution Corporation – formerly Anglo Irish Bank – to acquire the distressed building-services group Siteserv and the Topaz chain of petrol stations at a knockdown price, while he was still one of Anglo’s most significant debtors. Or his bitterly hostile takeover of O’Reilly’s Independent News & Media. “That’s ridiculous,” O’Brien countered at the suggestion it amounted to a personal vendetta. “It’s just business.”

That it takes Bill Clinton – a close colleague through the Clinton Foundation – to reconcile O’Brien’s business skills and altruism (“a market economy can go hand in hand with social justice”) and finally offer an imagined review at the Pearly Gates (“He’s done way more good than harm”) will strike many as a glib assertion by a curious choice of character witness.

Yet O’Brien’s character remains elusive. There is some effort in the programme to seize the love of his father, Dano, for diving as a theme, as though it might be the Rosebud in O’Brien’s Citizen Kane story, but it isn’t keen to get personal. Besides, the reputation O’Brien seems keenest to safeguard comes across in his previous interviews as one of inveterate laddishness.

Esat’s deal with BT is celebrated by “a huge piss-up for the staff”. His personal windfall precipitates going “on the lash that night”. Buying the Jamaican licence leads to “a ferocious hangover”, and so on. The way O’Brien tells it, everything sounds like a bit of a blur: a fortuitous chain of “lucky bounces” (to use Lowry’s phrase), good deals and better times, not the shrewd manoeuvrings of a fiercely protective, endlessly litigious billionaire. Or so the story goes.