Mackenzie Crook as Worzel Gummidge: ‘A lot of things don’t add up’ 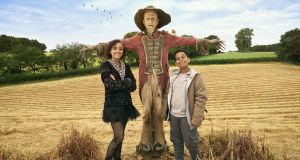 Eighteen years ago, Mackenzie Crook first arrived on our screens in an ill-fitting suit as Gareth Keenan, the assistant (to the) regional manager in The Office, pondering such questions such as, “Will there ever be a boy born who can swim faster than a shark?” In the intervening years, Michael Phelps’s televised race with a computer-generated Great White convincingly answered “not yet” and, more grippingly, Crook’s career has flourished. His recurring swashbuckling appearances in the Pirates of the Caribbean franchise are his biggest calling card, but he’s become a constant presence on screen, whether that’s through bit parts in projects such Christopher Robin or Game of Thrones (where he played the warg Orell), or as the central character of psychedelic druid Veran (and, for the second series, also his brother Harka) in Jez Butterworth’s Britannia.

As well as his breadth, the 48-year-old’s depth of projects is expanding too; Detectorists was a labour of love that he also wrote and directed. A warming comedy of countryside pursuits between two friends, Andy and Lance (played by Crook and Toby Jones), it earned two Baftas and ran for a nicely-concluded three series, pre-emptively winding up before the quality could dip.

The rural theme and auteur role continue with Crook’s newest series, Worzel Gummidge. Taking key slots on the BBC’s Christmas schedule, it’s a two-part reboot of the children’s classic, written by Barbara Euphan Todd, about the adventures of a scarecrow that comes to life in rural England. With Michael Palin, Steve Pemberton and Zoe Wanamaker (another of his Britannia co-stars) taking plum roles and newcomers India Brown and Thierry Wickens as leads, Crook was the obvious choice to play the title role, with a few hours in make-up helping to create the straw-battered look.

I love the idea of people sitting down together to watch it, and not watching it on the train with their earphones in

“My friend and colleague Kristian Smith got the rights to the original books and I don’t know why my ears pricked up, but as soon as he said it, I got a vision in my head about what the scarecrow should look like,” he says. “It felt like the right time to bring the character back and introduce him to a new generation.”

The main TV series ran from 1979 to 1981 with Jon Pertwee in the muddy suit, and was beloved by viewers of that era, even cropping up on the odd “best children’s TV show” countdown. But it hadn’t been on Crook’s radar growing up. The “blank canvas” it gave him attracted him to the project and, to ensure it continued, he refrained from watching the shows until after he wrote the script. It means that Irish audiences can come to the reboot with no prior knowledge too.

“I hope that will be the case,” he says. “I’m really keen for it to be watched by families. I don’t know if that’s overly romantic of me, but I love the idea of people sitting down together to watch it, and not watching it on the train with their earphones in. That would be a dream come true.”

The blank canvas also meant the challenge for Crook came not in emulating the older version, but in ensuring the book series, which ran from the 1930s to the 1960s (and Puffin’s first release, no less), spoke to an audience in 2019. That’s tackled rather nicely. For the cynics ready to pick holes at the logistics of a scarecrow who sometimes turns human, Gummidge bats their questions away early. “I shouldn’t think too much about it,” he eventually tells the kids on the topic of how he digests his food. “You’ll find a lot of things don’t add up.”

India came in and she blew us away; there was no question that we wanted anyone but her

The mobile phone question is answered too: the children, from a foster home, arrive at their home stay without their charger. A useful thing to happen, because, as Crook himself points out, mobiles can wreak havoc with storylines.

It’s also a breath of fresh, countryside air that doesn’t bend to historical depictions; the kids are people of colour, which adds a relevancy to today’s audience. It’s a move also seen in Armando Iannucci’s upcoming film The Personal History of David Copperfield, in which Dev Patel plays the title role. But ask Crook about his casting, and he explains the diversity wasn’t a conscious choice.

“In the original books, the children are middle class kids who come to stay with their poor relatives, and that seemed a little old-fashioned. I wanted them to be foster children coming from the city, to add a fish-out-of-water element,” he explains. “India came in and she blew us away; there was no question that we wanted anyone but her. And then I wanted someone who’s believably her brother. It wasn’t a conscious thing, it was the best actor for the role.”

Was he concerned about the reaction from the purists?

Even a renewed environmental message, ready-made in a show about a countryside farm, is lighter-touch than it could have been, given its potency.

“It’s sewn in this generation, so that you don’t have to preach it. It doesn’t have to be a lesson,” Crook explains. “They know more about it than the adults. My 12-year-old daughter is so into being eco-friendly in all aspects of her life. They’re all over it, so the shows have a subtle message about looking after the natural world – that’s all I wanted to put across. It’s like the younger gen have realised it’s up to them, and these foolish adults aren’t doing enough. That’s so exciting to me.”

The countryside has always been central to Crook’s life, even if he now resides in the depths of urban London with his wife and two children. Growing up in Kent, the middle child of three, he volunteered for the British Trust for Conservation, and now owns and tends to an eight-acre patch of woodland in Essex. It’s where he and his family spend much of their quality time, when he’s not taking on the creative’s triple threat of writing, directing and acting.

“For years I was just acting and not involved in the creative side of it, and now it feels like my field has expanded,” he says. “When I was beginning as an actor, I was on the cabaret circuit and the stand-up circuit, and I always wrote my own material with that. But it’s only in past five years that I’ve found a writing discipline, where I can sit down and work properly like an adult. And I really enjoy it.”

‘Rabbit in the headlights’

Directing, however, took a little time to master. “The first year of the Detectorists, I was like a rabbit in the headlights, leaning on everyone to show me what to do,” he says. “But I’ve only grown in confidence over the three series, and these two films. I feel like I can finally say I am a director.”

Does he see himself as having a niche?

“The things I’ve done have all been in the country, so maybe there’s a theme of showing the British countryside in all its glory, and lingering on the wildlife – not making it move too fast. After the Detectorists, I felt like I wanted to continue with the theme of countryside, but after Worzel, I’m more open.”

Crook is, however, likely to continue with existing projects next year. He says that a third series of Britannia, also starring David Morrissey and Kelly Reilly, is looking likely, and he still feels like Worzel Gummidge’s escapades haven’t quite finished.

“I’m so fond of the character that I’m finding it quite easy to come up for storylines for him. There’s a lot of scope. So I hope the BBC commissions another series. I’d like to be playing scarecrows for the next few years.”

Worzel Gummidge will air on BBC One on St Stephen’s Day at 6:20pm and on Friday December 27th at 7pm