Radio review: The host waits for guests to slip up before she turns the screw 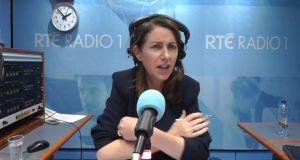 In a week when divisions in the Dáil grow ever greater, there’s a heartening show of political unity on the Late Debate (RTÉ Radio 1, Tuesday-Thursday). Even as the health and housing crises escalate, TDs and Senators from across the spectrum agree on one issue: nobody likes politicians.

For most people, this hardly counts as news, but judging by the contributions of some politicians on Katie Hannon’s nocturnal current affairs panel show, the realisation that they’re regarded with the same affection as suppositories seems like a revelation of Fatima-like proportions. Fine Gael Senator Tim Lombard, for one, admits on Wednesday’s show that the week has been “pretty damning for the Irish political system”. Lombard isn’t referring to creaking hospitals or rampant homelessness, however, but rather to the grabby double-jobbing of his party colleague, former TD Dara Murphy.

The inverse relationship between the spottiness of Murphy’s Dáil attendance and the alacrity of his salary and expenses claims is a theme that crops up across talk radio all week. But it’s an especially keen presence on the Late Debate, as Murphy’s behaviour hovers over fellow politicians like Banquo’s ghost. So toxic a brand is the former TD that other Fine Gaelers pile in on him: on Tuesday’s show, Senator Martin Conway calls his actions “scandalous”, while making sure to draw attention to his own hard work in public office. Such condemnations might have been more useful while Murphy was still in office, but it’s a start.

Hannon, for her part, seems to rather enjoy her guests’ discomfort, as when she and journalist Christina Finn go through the panoply of TDs’ expense entitlements. The discovery that legislators can claim mobile roaming expenses, years after such charges were limited by the EU, causes particular mirth to the host. “That’s my favourite,” she says, barely bothering to hide her mocking laughter. The assembled pols are, for once, silent.

Generally, however, Hannon’s guests are happy to sound off on the issues of the day, though whether this counts as debate is another matter. When Fianna Fáil TD Barry Cowen complains that the government has failed to provide enough new housing, Conway shoots back, “At least we’re building houses.” Such yah-boo-sucks stuff is great sport, but hardly helps those caught up in the housing calamity.

There’s a reminder of the reality that lies behind the party political jibes on Tuesday, when Hannon talks to Irish Times reporter Kitty Holland about the death of Anne Marie Connors, whose two children spent the night alone with her body after she died of an overdose in homeless accommodation last year. Holland, who broke the story, speaks of her upset at the situation, as well as her low opinion of so-called “family hubs”, which she compares to Magdalene laundries.

The politicians in attendance also intone condolences and concern, all doubtless sincere, but also slightly hollow. Cowen talks about people in similarly grim situations whom he has met, such as a 17-year-old girl in emergency accommodation who has tried to take her own life. “I feel some responsibility,” Cowen says plaintively. “What do you do in response to that?” Hannon asks sharply, by way of reminding her guest that this is literally the job of politicians.

Such moments underline Hannon’s qualities in the job. She hits just the right note of informality for the time of night, with a nicely understated sense of humour. But if a politician slips up or betrays inconsistency, Hannon turns the screw on them. Not everyone would be so kind these days.

“She was a perfect storm of everything that’s wrong in this country,” Carol Connors says of her daughter

Hannon’s stealthy approach seems positively benign compared to the tactics employed on Saturday with Cormac Ó hEadhra (RTÉ Radio 1). Ó hEadhra has a rapport with the politicians on his show in the same way that Muhammad Ali had one with George Foreman. “The good, the bad and the ugly have come before me,” Ó hEadhra says by way of introducing his panellists. “I won’t say which is which.” Pleasantries thus dispensed with, the host can get really stuck into his guests. When Fianna Fáil TD Thomas Byrne comments on the current Green Party revival by smugly remarking “we liked the Greens before they were popular”, Ó hEadhra curtly reminds him how that ill-fated coalition ended: “You chewed them up and spat them out.”

This uncompromising style doesn’t always engender reasoned argument, particularly with the host intervening more than usual with byelection count updates: at one point he even apologises for interrupting himself. But amid the melee, the host lands a few accurate digs, as when he asks why Fine Gael stuck by their misfiring proto-populist candidate Verona Murphy. But overall, it’s not so much political theatre as pure pantomime.

Beyond the duelling antics of TDs, however, people live with the consequences of their actions, or lack thereof. On Tuesday’s Liveline (RTÉ Radio 1, weekdays), Joe Duffy talks to Carol Connors, the mother of Anne Marie Connors, about her daughter’s difficult life and tragic death. With astonishing composure and clarity, Carol details the blows that befell Anne Marie, from mental health and addiction issues to her son’s autism and the stress of homelessness, before tying it into the bigger picture. “She was a perfect storm of everything that’s wrong in this country,” she says of her daughter.

Having played to the peanut gallery over the farmers’ protests the previous week, Duffy is far better here, providing the time – and, moreover, the sympathetic space – for Carol to talk about her “naive, innocent and vulnerable” daughter. It seems almost cruel to listen in as Carol talks of minding her grandchildren as they play games pretending to move house, causing a rare catch in her voice. “That got me,” she says. But it’s an essential piece of radio, a heartrending rebuke to our failures as a society. “You’re a remarkable woman,” says Duffy. Out politicians may debate, but Carol’s words rang true.

Steve Coogan’s alter-ego Alan Partridge has long been the bane of daytime DJs, chiefly by skewering their verbal tics and affectations, for instance when he portentously insists the plural of “Lexus” is “Lexii”. So when Ronan Collins (RTÉ Radio 1, weekdays) reads out a listener’s message about a gig by a Co Roscommon ukulele collective, he veers straight into Partridge country. “To bribe, he sent me a card with two plectrums stuck on the outside,” Collins says, before adding the inevitable kicker: “Two plectra?” See what he did? A show on North Norfolk Digital is his for the asking.