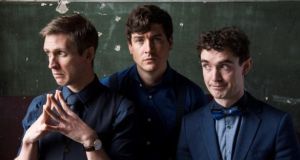 Sketch group Foil, Arms & Hog took third place in the most watched videos of the year

The most watched videos by users of YouTube in Ireland in 2019 included a vlog by internet sensation James Charles, a comedy sketch by Irish trio Foil Arms and Hog and a conspiracy theory video by YouTube star Shane Dawson.

Taking first place as the most watched video in Ireland this year was a 41 minute video entitled No More Lies in which teenage make-up artist James Charles responded to allegations made against him by fellow beauty vlogger Tati Westbrook.

The video addressed criticism the beauty vlogger had received from Westbrook in a video she had posted with the aim to call out and “cancel” him. To date, Charles’s video response has amassed over 18 million hits.

Second on the list was Conspiracy Theories with Shane Dawson, covering a series of popular conspiracy theories including the causes of the 2018 California wildfires - Woolsey Fire - and whether the popular clothing brand Hollister and Abercrombie & Fitch use “subliminal messaging”. The YouTuber and his friends discuss in detail in the video whether the conspiracy theories could be true.

Irish sketch comedy group Foil Arms and Hog took third place in the most watched videos of the year with When Irish People Can’t Speak English, a comedic take on what can happen when you lie about your ability to speak fluent Irish.

Also making the top 10 list was the Hurricane Lorenzo weather warning video from Independent.ie in October and a video of presenter James Corden playing a prank on footballer David Beckham.

A video of chef Gordon Ramsay tasting some of the most spicy chicken wings in the world made the final place on the list.

Topping the list of the 10 most watched music videos of the year is teenage pop-star Billie Eilish with her hit Bad Guy followed by Old Town Road and Vossi Bop.