TV Review: It’s a compelling story. Chef meets Michelin star, loses it, gets it back again 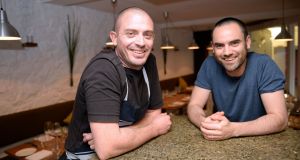 Damien Grey, a chef on a mission, repeats the words so frequently they sound like a mantra: “Bitter, sour, salt, savoury and sweet.” These, the five basic tastes, are related with punch and passion throughout Chasing Stars (RTÉ One, Thursday, 10.15pm) as Grey devises a menu for his new restaurant, Liath.

If he is bitter about the closure of his earlier restaurant, though, the Michelin- starred Heron and Grey in Dublin’s Blackrock Market, or sour at the exit of his former business partner, Andrew Herron, he does not express it.

“Liath’s got to prove itself,” Grey says early, although, given that his new restaurant’s name is the Irish translation of his own, he may as well be talking about himself.

Indeed, Mark Wooderson’s documentary is essentially The Grey Show, making him the film’s subject, its presenter and even its narrator. Interviewing one colleague over a selection of dishes and drinks in Copenhagen, Grey’s voiceover interjects while he eats (“And this is exactly what I need, to taste something new . . . ”) as though we can hear his thoughts.

So we watch him visit Copenhagan to take inspiration from the world-leaders in contemporary cuisine and an assortment of pals. Among them, Matt Orlando, the chef behind Amass, is the most candid, teasing out the difference between purpose and posture in “sustainable” practices, and admitting that he is “first and foremost a psychiatrist, then a babysitter, then a chef.”

Grey doesn’t indulge in such personal politics or the ethical dilemmas Orlando describes of reconciling the passion of cooking with a “materialistic enterprise” for rich diners. He spends more time buzzing and humbled by every encounter – fishermen in Lough Rea, restaurateurs and entrepreneurs in Chicago – as they come to inform Liath’s dishes.

From a storytelling point of view, the hero would come to realise that the Michelin star was not essential. But the honour is bestowed nonetheless; proof that at Liath you can have your cornet of smoked eel and anchovy, with pickled shallots and black truffles, and eat it too.

Getting a reservation is another matter.

All quiet on set: How do you make a TV drama in a crisis?
7