Nothing about this show is supposed to be cool, making Ryan Tubridy the perfect host 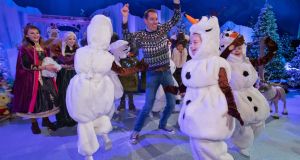 You could never accuse The Late Late Toy Show, now in its 44th year of nostalgic merriment, of having become too commercial.

That’s because the show that began in 1975 as a late segment designed to help addled parents find gifts for their little ones was always, at root, a commercial: a little bit of harmless product placement on the national talk show.

More than four decades and three presenters later, you could make the argument that this broadcast, which now attracts Irish viewers worldwide to the order of 1.5 million, has been instrumental in manufacturing Irish desires. Without it, would we have ever dreamed of getting that ungettable bauble, meeting our elusive celebrity heroes, or, in a sign of the grip it has taken on the Irish imagination, one day appearing on The Late Late Toy Show?

Ryan Tubridy’s eleventh year as host begins on a winter wonderland set, swirling with singing and dancing children who whip the music of Disney’s Frozen to life.

In a show as full of self-reference and nostalgia as this one, Gay Byrne is a presence that registers for everyone in the audience

Whether this, a franchise born in 2013, now counts as a children’s Christmas classic, or its emulation here works as an unconscious promotion of the film’s recently released sequel, is neither here nor there. Cynics are politely asked to let it go.

Besides, Tubridy, attired as Olaf, the film’s irrepressible, adorably naïve snowman, is more plausible in this physique than he was the previous year when asked to step into a role that had belonged to Hugh Jackman. “You thought that was my real nose, didn’t you?” he wonders, discarding a carrot, but still trapped behind protruding prosthetic teeth. It’s a fair question. Now, let the punning begin!

“Ice to see you, to see you ice,” Tubridy says. “You get my drift,” he says. “If you don’t like my Frozen puns don’t worry,” he says, “all is not frost.” Somewhere a factory of Christmas Crackers are missing their jokes. Elsewhere the nation’s headline writers clutch their brows.

‘Forgot we were on TV’

You want toys? Ryan has toys. There is a pink hat, in the shape of an adorable creature, whose limbs flail with abandon when you tug its legs, as though it was Ryan Tubridy presenting The Late Late Toy Show. There is a musical vanity mirror that Ryan adopts an effete persona to inspect, lest you get the wrong idea (“That’s the kind of thing a man needs in his life, I’ll tell you”).

There is an admirably conscientious application on a mobile phone that converts books into sign language for the deaf, and, speaking of that phone, there is one for everyone in the audience. (Between this and a bunch of €150 vouchers from various sponsors, the audience do pretty well tonight.)

As ever, though, it’s the kids who are the stars of the show, and few come quite as eruptive or mirthful as a six-year-old named Harry, who clearly got the gist of tonight’s performance in rehearsals and is enough of a pro tonight to just wing it. Tubridy, bless him, bears the tight expression of a man who will hit his marks through this frantic broadcast, even if it brings him worryingly close to doing the same to the children.

“I forgot we were on TV for a minute,” Tubridy jokes, when his instructions begin to sound a bit brusque. Harry doesn’t seem to mind. Even he may feel nostalgic, though, when placed into a head brace with a pole that ensures regulation distance between two participants of a staring contest, that this is the sort of fun we used to have to make for ourselves.

The sentiment is entirely sincere, although the vehemence makes Santa sound a little like Liam Neeson in Taken

He also has to draw focus when Ryan, sitting casually on the corner of a table, manages to break it, compensating with a whoopee cushion farting contest.

Speaking of pros, five year old Ella, a golfing prodigy, sinks a series of chips into a golfing target, after telling Tubridy what she has spent her accumulated nine euros of prize money on: ice cream. Who is her favourite golfer? Shane Lowry. Would she like to meet him? Out he comes. Lowry, for his part, does not say what he has spent his own winnings on, but he does invite Ella to the Irish Open next year. It is hard to tell whether she is transfixed, or slightly terrified.

Perhaps it’s the speed of the engagement that’s daunting, because this Toy Show moves in a crazy hurry. Even the energetic dancers supporting MC Tiny, rapping out Old Town Road with gusto, might find its pace excessive. So much so that a successive singer, whose parents are on a belated honeymoon in New York, is reassured by Tubridy that “tonight we’re all your mum and dad” as though the necessary paper work has been stunningly expedited.

And yet, by the time the show has reached it’s halfway mark, the promised and expected tributes to the Toy Show’s originating host Gay Byrne have not yet materialised, unless they are very, very subtle. That is not the show’s strong suit. But in a show as full of self-reference and nostalgia as this one, his is a presence that registers for everyone in the audience.

As the show progresses, through dolls and games and stage school poppets performing the pop hits, Tubridy begins to relax a little. Sure, a joke about the winter set’s snowflakes – “we’re so inclusive here” – seems a little too characteristic to be innocent.

But his sympathetic interactions with a young girl named Sophie, whose brother Cian is in Crumlin children’s hospital with Leukaemia, is genuine, raining gifts and London trips on her as she dissolves in grateful tears. And his regard for a young kid called Sophia, prone to bullies, is unaffected and supportive. And gender fluid dolls or another girl who mentions having two mothers go with nothing but encouraging comment. The Toy Show may be forever, but Ireland, thankfully, has changed significantly.

Elsewhere, Ryan is so moved by the cruel phenomenon of 4,000 children now living in emergency accommodation – typically the limbo of hotel rooms – that he points a forceful finger at the camera insisting, “Santa will find you: he has the magic, the means and he knows where you are.”

The sentiment is entirely sincere, although the vehemence makes Santa sound a little like Liam Neeson in Taken.

If the show is similarly alert to separations – saluting family members in hospital, or those who have emigrated to distant shores – it is driven by the possibility of reunion, springing the surprise return of an emigrated older sibling on Lee, the last boy in the vehicle parade, to show “how important home is to families and friends all around the world”.

Even more than a twerking toy unicorn, or a bright fuzzy creature with an endlessly extending neck, or a young climate warrior who gamely separates out her recycling, aware that all these plastic toys will soon be landfill, or even a young boxer Ella, star struck to meet Katie Taylor, that is the enduring appeal of The Toy Show: that if you’re watching it at all you can never forget where you come from.