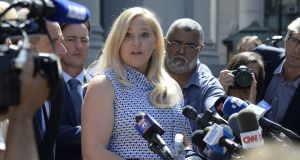 Jeffrey Epstein victim: Virginia Giuffre claims she was forced to have sex with Prince Andrew when she was 17. Photograph: Jefferson Siegel/New York Times

The British royal family is braced for more revelations about Prince Andrew’s connections with Jeffrey Epstein as the BBC prepares to air a Panorama interview with his accuser Virginia Giuffre at on Monday night.

Giuffre was interviewed by the programme last month for a long-running investigation about Andrew and his connections with the sex offender, who killed himself in jail in New York August after being charged with sex trafficking.

But before the Panorama episode was ready to air, Andrew agreed to do a sit-down interview with its rival BBC programme Newsnight; his disastrous appearance, in which he failed to show any empathy for Epstein’s teenage victims and offered questionable defences of his own conduct, quickly led to his withdrawal from public life.

The BBC has now confirmed that the Panorama episode, called The Prince and the Epstein Scandal, will be shown at 9pm today in an hour-long edition, including Giuffre’s first British television about regarding her meetings with the prince. She claims she was trafficked by Epstein and, when she was 17, was forced to have sex with Andrew, who posed alongside her at the home of Ghislaine Maxwell in an infamous photograph.

“It was a really scary time in my life,” Giuffre says in a brief clip issued by the BBC ahead of the programme. “He knows what happened, I know what happened. And there’s only one of us telling the truth.”

Because the interview was filmed last month she will not directly respond to Andrew’s Newsnight interview, where the royal claimed that sex with the then teenager “never happened”, insisting he had been at a Pizza Express in Woking on the same day.

He said it was a “positive act” for a man to have sex and said that made it very hard to forget: “It’s very difficult to try and forget positive action, and I do not remember anything.” He added: “I can absolutely categorically tell you it never happened. I have no recollection of ever meeting this lady, none whatsoever.”

Despite this, the BBC said the programme reveals new details about Giuffre’s time with Epstein, while also looking at Maxwell, who has not been seen in public for months, amid speculation about her continued contact with Andrew and questions about photographs of a rare public appearance at a California burger bar. The British high-society magazine Tatler failed to track her down, and the Sun newspaper has offered a £10,000 (€11,750) reward to anyone who can locate her.

The Panorama interview comes as Andrew faces fresh accusations relating to his financial affairs and calls for him to be stripped of his HRH title. An investigation by the Mail on Sunday claims the duke had conflicts of interests between the multimillionaire property developer David Rowland, described by the newspaper as his “close friend”, and his role as the UK’s special representative for international trade and investment.

It claims leaked emails reveal Andrew was “quietly plugging” a private Luxembourg-based bank owned by the Rowland family. The newspaper alleges the prince allowed Rowland’s son, Jonathan, to accompany him on taxpayer-funded official trade missions to China and Saudi Arabia, which would have enabled the family to expand their bank and woo powerful and wealthy clients.

It also claims Andrew held a 40 per cent stake in an offshore company with David Rowland, called Inverness Asset Management, which was based in the British Virgin Islands. It says the pair planned to persuade wealthy contacts to invest in a fund structured in the Cayman Islands, promising them tax-free income. It was unknown if the venture ever operated, the paper says, but it was in existence until March this year. One of Andrew’s subsidiary royal titles is earl of Inverness.

The newspaper also alleges that in an email exchange with the prince, when he was facing the loss of his envoy role because of the Epstein scandal, Jonathan Rowland suggested their commercial activities could continue “under the radar”. Andrew responded, “I like your thinking,” the paper claims.

The duke stepped aside as trade envoy in 2011 after it became public he had stayed with Epstein after the convicted sex offender’s release from prison.

Buckingham Palace says: “The Duke of York was the UK’s special representative for international trade and investment between 2001 and July 2011 and in that time the aim, and that of his office, was to promote Britain and British interests overseas not the interests of individuals.”

The Mail on Sunday says that Rowland, who quit as Conservative Party treasurer shortly after he was appointed in 2010 amid controversy over his business affairs, had declined to comment for legal reasons. – Guardian

Panorama is on BBC One at 9pm today