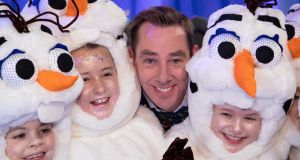 Ryan Tubridy pictured with some of the participants on the set of the Late Late Toy Show at a preview event on Thursday. Tubridy will play the character of Olaf the snowman in a Frozen-themed opening number. Picture Colin Keegan/Collins Dublin

The Late Late Toy Show will feature a special “nod of respect” and “doff of the cap” to the late Gay Byrne, host Ryan Tubridy said on the eve of the popular TV event.

This will be Tubridy’s 11th time hosting the RTÉ ratings-winner, and he said family, nostalgia and the experience of watching the show together were “at the heart of things this year”.

“It’s been very different since Gay died. You’d always have him in the back of your mind: ‘What would Gay think?’”

In the trailer for the show, “Uncle Gaybo” is inscribed on a wooden chest, wrapped in a heart shape.

“Obviously, we miss him and we loved him dearly,” said Tubridy. “Gay was who I watched on TV as a boy and so many other people who watch tonight would have watched him too.”

The idea for the show was born when Late Late researcher Pan Collins discovered some niche toys in the Nimble Fingers store in Stillorgan, Dublin. The show initially began as a short 30-minute slot in 1975 and was hosted by Byrne for 24 years until his retirement from the show in 1999.

Decades later, the show has become the most-watched Irish television programme of the year, with an audience of over 1.5 million people tuning in from all over the globe in 2018.

Memorable moments from the early days included quips by Dustin the Turkey about Byrne’s Christmas jumpers. “These disgusting Christmas jumpers are Gay’s fault, he can take the blame for that,” Tubridy joked.

The inspiration behind this year’s curtain-raising musical number is Frozen. Tubridy will play the character of Olaf the snowman, and promises to give his “most outrageous” performance to date.

“I thought last year was quite intense but I’m going full goof this year. The costume is a sweat-fest... I even had to go to the dentist to get a special bracket put into my mouth so I could have a proper Olaf tooth.”

While some Late Late watchers enjoy participating in running commentaries on social media platforms like Twitter, Tubridy encouraged viewers to put their phones away during tonight’s show.

“Remember these are the moments that dreams are made of because there are people who aren’t here anymore and people who won’t be here in the future. So put the phones down. The most important people are right beside you,” he said.

Some 200 children from around the country will participate, and all toys featured on the show will be donated to charity following the broadcast.