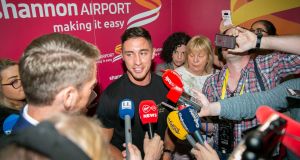 Love Island winner Greg O’Shea speaking to the media after touching down at Shannon Airport on Wednesday. Photograph: Arthur Ellis

There was a massive scrum to see and photograph Ireland Sevens rugby star and Love Island winner Greg O’Shea when he arrived back in Ireland on Wednesday.

The Limerick man’s flight from London touched down at Shannon Airport shortly before noon.

An estimated 300 fans were waiting to see him. “It’s amazing. I thought only my family would be here but all these people. Literally, it could have been my dad outside the door and I would have been happy but this is amazing,” said the 24-year-old on his arrival.

The big question on fans and reporter’s minds was about whether and when he would take his ITV show-winning partner Amber Gill to Limerick. He said he “100 per cent wants” to bring her over.

“I asked her about 50 times if she was coming home with me now but she’s so busy. Everyone in Britain wants a bit of Amber but I will get her over definitely very, very soon. I’d love to bring her just to have a pint of Guinness in a quiet pub somewhere. She’s never had Guinness before so that will be a big one,” he said.

Speaking about the blossoming relationship between the pair he added: “I only met her two weeks ago . . . but we’re definitely going in the right direction.”

Now based in Dublin, the Scoil Íde, Corbally and Crescent College Comprehensive past pupil said it had been a while since his last visit to Limerick and he looked forward to catching up with his family.

“I just can’t wait really to talk to my family and friends. I didn’t tell anyone except my parents and best mate I was going in [to Love Island] so I’ve a lot of explaining to do.”

Asked how he found being on the show he said: “Being an Irish lad, and you’ll all understand this, we kind of just take things in our stride so I didn’t really find it tough. I went on holidays for two weeks and ended up winning the show. I was lucky to come out with Amber and I’ve always been a one-woman kind of guy so I can’t wait to get her over here.”

Later he visited patients at the Children’s Ark in University Hospital Limerick which is the only inpatient facility for sick children in the midwest.