Gerry Thornley: Greg O’Shea happy to be in Sevens heaven 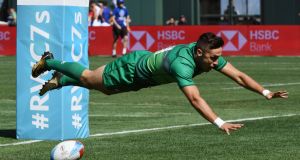 Ireland’s Greg O’Shea after scoring a try against Australia in 2018. ‘The fitness level required for Sevens is insane.’ Photograph: Mark Ralston/AFP/Getty Images

Back in the summer of 2015, the then Munster academy player and current member of the upwardly mobile Ireland Men’s Sevens team, Greg O’Shea, borrowed a bike from a friend to cycle home from the beach while on holidays in New York.

“It was a rusty old bike,” he admits.

“The chain fell off, I fell off the bike and kinda landed on my right leg to catch myself and kicked my left leg off the cog of the bike – you know, the disc – and it was like getting a knife and just cutting my Achilles [tendon].”

“The blood was insane. I didn’t realise what happened. I was ‘Oh god, that was sore’. I went to put my foot down, but your leg doesn’t work without your Achilles. You can’t even put your foot down. Your foot is limp. I knew I’d done something. Into a taxi, into hospital and it was ‘look, you’ve cut your Achilles, it’s going to need surgery’.”

His Under-20 World Cup hopes scuppered, Munster brought him home, oversaw his operation and recovery, extended his academy deal and then, after he broke into the Sevens squad, he was given another year on a joint academy/Sevens contract.

“The year after that accident was mentally very tough and I can’t thank Munster enough for giving me that extra year. It could have easily been like putting down a horse, ‘your leg is gone’. But they gave me another year. Now look, I’m in the Sevens team and the world is our oyster.”

O’Shea is referring to the Ireland Men’s Sevens team winning the Hong Kong title in April when beating the hosts 28-7 in the final, thereby qualifying for the 2020 World Rugby Sevens Series.

It’s the product of the hard work by the squad under the IRFU director of women’s and Sevens rugby, Anthony Eddy, who coaches them alongside Stan McDowell. It’s also rewarded the investment in the Sevens programme by IRFU Performance Director David Nucifora since it was re-launched in 2015, witness the key appointment of Allan Temple-Jones, the head of athletic performance, who had worked with South African Sevens for a decade.

Now, no less than Eddy and the squad captain Billy Dardis, O’Shea believes qualifying for next year’s World Series will completely alter the landscape in providing a new pathway into professional rugby in Ireland.

“For rugby in Ireland, it’s massive,” according to O’Shea, who also says their qualification has been popularly received elsewhere. “I think world rugby as a whole is delighted to have Ireland on it because there’s a huge following for rugby in Ireland.”

The prospect of having a World Series event one day in Ireland is now a very real one.

O’Shea, whose family are steeped in Shannon, won the Munster Schools Senior Cup with Crescent College Comprehensive in 2013, and also has an athletics background with the Dooneen Athletics Club. His father Niall and mother Carol both ran for Ireland.

“I looked at it and thought: ‘Am I going to get there compared to rugby? I decided, ‘I love rugby to bits, my whole family is rugby, and it’s just a better option for me.’ So I decided to go down that route.”

Now, O’Shea’s speed and frame are best equipped for Sevens.

“Obviously I’m not the biggest. I’m about 87kg, so it kind of gets rid of the big 120kg-130kg guys that I’m running into, do you know what I mean?” O’Shea also cites a study conducted by one of the academy coaches in Munster, Mark Butler, and the significantly increased number of touches, tackles and involvements for players in a Sevens game.

“And that’s why I enjoy the Sevens side of it, because there’s more involvement, more space and it’s more entertaining I feel, for the spectators.”

As well as playing in front of big crowds, the players are also making more decisions on the ball while fatigued.

“The fitness level required for Sevens is insane. I was playing 15s my whole life and I’ve an athletics background, so I would consider myself a decent runner. Running is my thing. I got into the Sevens and it was completely mind-boggling how much running I had to do.”

However, with the help of Temple-Jones, by the time they reached Hong Kong “we were so fit and flying it. The level of volume our bodies can handle now compared to when I was doing 15s is completely different. But 15s is different. There’s more hits, more impacts. So there’s just two different athletes then as well.”

“So when you speak about the crossover, that’s a discussion the union are going to have to have, of being able to cross your athletes over.”

Indeed, as well as being a career in its own right, the Sevens game could also be a route back into 15s, as demonstrated by Cheslin Kolbe and so many in other countries. In Ireland, in the last four years it has provided a pathway for Rory O’Loughlin, Adam Byrne, Barry Daly, Alex Wootton, Dan Goggin, Shane Daly, Tom Daly, Nick Timoney and, latterly, Robert Baloucoune.

“If you put your mind to it, and you keep practising, and you have more involvements, you’re going to improve as a player,” says O’Shea, “and you can see that with Robert Baloucoune, who went back up to Ulster, unfortunately they had a couple of injuries and he got his opportunity, and now he’s a starting winger in the European Cup.”

While in the Munster academy, O’Shea also qualified from the School of Law at the University of Limerick, and has been appointed to the Rugby Players’ Ireland executive board.

“Maybe that’s how I managed to slip in, my law background,” he says, laughing. “It’s great for the Munster lads, because the academy set-up is right beside UL. I remember timing it, and it took me eight minutes to get to a lecture, which is perfect for guys in the UL. It’s much tougher for the lads in UCC.”

“The plan is studying my FE1s, which are professional law exams, get them done while I’m playing rugby and then hopefully become a solicitor once I retire.”

Next up, the Sevens squad will compete in the World Series events in London and Paris at the end of May and beginning of June.

“After that in the middle of July, we have the Olympic qualifiers in Paris, which is a big target for us now.”

For O’Shea and the Sevens squad, onwards and upwards.