Line of Duty: Gloriously overheated. Terrifically entertaining. So why does it feel staid?

Is its maker Jed Mercurio spending too much time on his other show, Bodyguard? 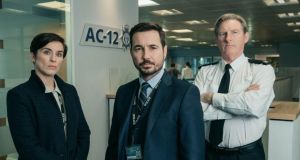 When police convoy ED-905 is intercepted by an OCG, but a twist of fate suggests the intervention of a UCO, it seems like another job for AC-12. At least, that’s the initial impression.

Viewers of Jed Mercurio’s terrifically entertaining, gloriously overheated Line of Duty (BBC One, Sunday, 9pm), now in its fifth series, are well accustomed to following plot details that resemble nothing more closely than the serial number of a complicated software package.

“Management of police information,” explains Superintendent Powell, who may well prove a friend, a foe, or an oscillation between the two. Whenever the internal affairs officers of AC-12 doggedly pursue the “bent coppers” hiding among them, it’s wisest to trust nobody.

Mercurio’s management of plot information has always been a scattergun affair, raining down character details, rattling action sequences and red herrings so thick and fast that a typical opening episode feels like an entire series got shrunk in the wash.

My favourite example, from a previous season, was the brisk establishment of a new partner for Arnott, given a surge of romantic chemistry and a tangle of complex personal backstory, before someone just flung her out of a window before the end credits rolled. What other show has so many ideas it can defenestrate a couple in episode one?

By comparison, this season’s opener is quite a staid affair – a daring heist (ho-hum), the discovery of a police leak that implicates a member of their own division (again) and a final twist that upends our suspicions about the identity of the UCO (Undercover Officer) in the OCG (Organised Crime Group).

Mercurio recently set pulses racing with a newer series, Bodyguard, and, like the constantly collapsing marriage of Adrian Dunbar’s sublimely gruff and paternal Superintendent Hastings (“God, give me strength!”), you can’t help but worry that his longstanding relationship with Line of Duty may suffer as a result. Leave that painted hussy, Jed, and come back home.

Perhaps, though, AC-12 is simply running short on suspects, raising the finger of suspicion at Hastings himself, again, now a deadbeat divorcé in waiting, slumming it in a cheap hotel and tidying away loose ends of internal corruption on an authoritative whiteboard.

Fleming and Arnott, who have buried the friction of her promotion and his incarceration, and standardised their haircuts, are eyeing him with unease. In the meantime Arnott has added a beard to his recently acquired three-piece suits and finally – finally – looks more like a senior detective and less like the glass collector in his uncle’s bar.

“They’re my best team,” Hastings tells Powell. “They’ll get to the root of anything.”

The rogue UCO in that heinous OCG better watch out. AC-12 have always known the letter of the law.

Covid-19 and dementia: ‘My father studies me, as if trying to put together a difficult jigsaw’
6