Game of Thrones season two recap: Look into the flames

or a crash course on all the different factions, read on ... 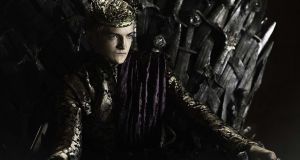 Jack Gleeson as Joffrey in Game of Thrones. Photograph: HBO

The final season of Game of Thrones arrives April 14th. Before then, prepare by rewatching the first seven seasons. This binge has just begun. You will betray everything you once held dear. And it will all be worth it.

You can catch up on seasons past with our ultimate watching, or plunge ahead with a look into the flames at season two.

Novices beware: This article is dark and full of spoilers. And now, your watch continues . . .

How should I rewatch Game of Thrones season two?

If you want to catch up fast, concentrate on the installments that are central to the complicated plot and provide all the feels. Here are four must-watch episodes.

Episode one – The North Remembers: For a crash course on all the different factions, a whistled Rains of Castamere, the Citadel’s weather report, a beach barbecue and Stannis putting the Lannister twincest on blast.

Episode four – Garden of Bones: For an examination of codes of conduct in times of war (compare attitudes held by Stannis, Roose, Robb, Tyrion and Tywin). Extra fun: Shadow baby!

Episode nine – Blackwater: In which we get the first major onscreen battle of the series, a song from Bronn, a rousing speech from Tyrion and some major snottiness from Joffrey. Bonus: Cersei tries to get Sansa drunk.

Episode 10 – Valar Morghulis: Because it’s chock-full of magic tricks. Visions and dragon fire in the House of the Undying, visions in Melisandre’s flames, a Faceless Men face-lift and the army of the dead. Three blasts!

Five things to watch for in season two

As you continue on your great rewatch, you’ll find more developments that have big payoffs down the road: Craster sacrificing his sons, Roose volunteering to send “my bastard” to retake Winterfell, Theon worrying about being emasculated in front of his own people. (Too soon?) But if you were ever confused by the chaos and civil war that erupted across Westeros after King Robert’s death (also known as the War of the Five Kings), then focusing on a few themes, characters and situations might help.

Few shows have more of them than Game of Thrones. In season two alone: Tyrion empathises with Cersei about failing their father – no one could live up to the expectations of a man like Tywin. Theon’s existential crisis stems in large part from trying to serve two fathers: bio-dad (Balon Greyjoy) and the man who raised him (Ned Stark). Because one of them is dead, Theon is trying to live up to the expectations of the one who is living – even if that means betraying the Starks.

It seems the only solution in Westeros is to shake off paternal pressures and try to live by one’s own code.

Tyrion proves he is particularly well-suited to court intrigue and deception when he serves as acting Hand of the King.

He realises that Janos Slynt would betray anyone to the highest bidder, so he revokes Slynt’s command of the City Watch and exiles him to the Wall. He realises that the Martells could be useful allies and so secures their co-operation with a marriage arrangement. And he knows that Catelyn can be manipulated by the love of her children, which he uses to trick her into releasing his brother, Jaime.

He is also aware that someone is spying for Cersei, so he decides to find out who by giving conflicting information to Pycelle, Varys and Littlefinger and then waiting to see which story Cersei hears, a stratagem that results in Pycelle’s (temporary) removal from the Small Council. Tyrion also determines that Lancel is sleeping with Cersei and should be manipulated easily into spying on Cersei. When that spying reveals Cersei’s wildfire plan, Tyrion steals and improves upon her tactics. (Perhaps he shouldn’t be too dismayed that Tywin later steals the credit for saving the city; it runs in the family.)

Although Tyrion is very good at playing power broker, he is unfortunately prone to making rash threats. This isn’t very smart, even if it is satisfying to watch him slap Joffrey, threaten a member of the Kingsguard and arrest the Grand Maester for tattling to Cersei – something that technically isn’t a crime. All of the threats that Tyrion makes in season two have severe consequences later on.

Jon Snow has Ygritte. Bran has Osha. Robb Stark has Talisa, from Volantis. Arya has Jaqen H’ghar, from Braavos (following her previous Braavosi mentor, the unfortunate Syrio Forel). Surely Gendry was shaped by having served as an apprentice for Tobho Mott, even though we don’t see many of their interactions – we can only hope Tobho passed down his arcane knowledge of how to reforge Valyrian steel.

Tyrion has Varys, from Lys, and Shae, from Lorath. (Sansa also benefits from Shae’s presence.) Stannis, of course, has Melisandre, from Asshai. And let’s not even get started on everyone in Dany’s circle!

Many of these influencers from outside the Seven Kingdoms provide necessary wisdom – helping reframe perspectives on people above and below the Wall, on gender roles, on the tenets and practices of different religions and on the damage caused by the civil war, especially to the common people. If people mention a faraway land, pay attention.

We first learn about the possibilities of magical fire in season two – baby dragon bursts, Melisandre’s sacrificial beach barbecues, visions in the flames and the napalm-like wildfire, which has a real-world provenance: It’s based on a Byzantine Empire weapon called Greek fire.

The key to Targaryen power was dragon fire; wildfire was a substitute during the reign of the Mad King (“Burn them all!”). The Lannisters inherited the wildfire from the Alchemists’ Guild, which refers to wildfire as the substance, as in, the substance is fire given form.

Wisdom Hallyne is very proud of the substance when he confers with Tyrion about the 7,811 pots he has stored in his vaults – enough to torch Stannis’s fleet and his whole army. Tyrion tells him to make a lot more, which comes in handy later when Cersei decides to blow up the Sept of Baelor. (Macabre foreshadowing here: Lancel is the first to inform us about wildfire’s existence; it later becomes the instrument of his death.)

Why no APB for Arya?

After Tyrion reminds Cersei that they have lost one of the two Stark girls they had to trade, the queen asks a favor of Lord Petyr Baelish: Locate Arya so the Lannisters can secure Jaime’s release in a prisoner exchange. But Littlefinger doesn’t lift a finger to help with this request, even when he stumbles upon Arya accidentally. Cersei suggests to Joffrey that they ask Tywin to have the armies help search for Arya, but Joffrey – a well-known pain – rejects this because kings don’t ask, they command.

So Littlefinger never bothers to look for Arya, Joffrey strikes out, and Tywin isn’t notified that she is missing. Worse yet, even after Tywin realises that there is a highborn Northern girl at Harrenhal in disguise as a commoner, he fails to suspect her true identity. In fact, he gives her tips on how to pretend to be lowborn!

How should your sweet summer child watch Game of Thrones?

Watching with younger viewers? Here are some scenes you might want to skip in season two.

Episode one – Littlefinger’s brothel/bastard massacre: “Do you have any idea how ridiculous you sound?”, Ros asks an overly enthusiastic prostitute. Awkward. Then Janos Slynt’s Gold Cloaks storm the brothel, and other areas, in order to kill King Robert’s natural-born children, even the babies. (This scene comes about 50 minutes in and lasts about four minutes.)

Episode two – sexy times with Theon, Stannis and Littlefinger: When Theon’s ship sails to the Iron Islands, he hooks up with the captain’s daughter while they discuss the Ironborn’s tradition of salt wives (around 20 minutes in). Immediately after this, we get a sneak peek at how Littlefinger manages to keep his customers happy, including the voyeurs who spy on sex acts. Those who are super-cautious might also find Theon’s horseback ride with his sister Yara a little too racy. “I don’t imagine it’ll be a story fit for children”, she says. (Around 37 minutes in; the objectionable part lasts under a minute.)

Also, Melisandre tells Stannis he has to give all of himself to the Lord of Light, which apparently means having sex with her on the map table of Westeros. She disrobes, he doesn’t. (Around 51 minutes in; lasts less than two minutes.)

Episode four – Torture at King’s Landing, Harrenhal: Tyrion gives Joffrey two prostitutes, and Joffrey naturally makes one abuse the other (14 minutes in, lasts about three minutes). The Mountain and his friends question prisoners who have buckets of rats tied to their bellies so the vermin will chew into them (30 minutes in). Melisandre disrobes to reveal her pregnancy and delivers a magical apparition (50 minutes in, and it takes just over one miraculous minute to go into labour and give birth).

Episode six – rough justice: What’s worse, Theon’s sloppy job of beheading Ser Rodrik Cassel or Bran’s anguish as he begs Theon to stop? (About 11 minutes in, lasts about a minute.) Then there’s the riot in King’s Landing, which is frankly disturbing, what with the High Septon’s dismemberment and Sansa’s near-rape (about 27 minutes in, lasts just under four minutes). – New York Times