From Jon and Ygritte’s sexy cave time to the Red Wedding, here are the key episodes to rewatch and themes to consider. 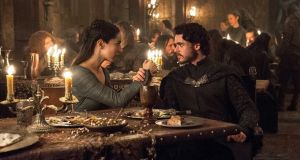 The final season of Game of Thrones arrives April 14th. Before then, prepare by rewatching the first seven seasons.

I see a darkness in your binge, and in that darkness, eyes staring back at me. Brown eyes, blue eyes, green eyes. Eyes you’ll binge forever.

You can catch up on with our ultimate watching guide, or pray to the Lord of Light as during a deep dive into season three.

Novices beware: This article is dark and full of spoilers. And now, your watch continues . . .

How should I rewatch Game of Thrones season thee?

If you want to catch up fast, concentrate on the instalments that are central to the famously complicated plot and the ones that provide all the facts and feels. These are four must-watch episodes of Season 3.

Episode one – Valar Dohaeris: For the reset of where most of the characters are on the map and a demonstration of some new, necessary relationships (Tywin and his pen pals, Margaery and the people). Plus: our first giant. (Don’t stare too long; they’re shy.)

Episode five – Kissed by Fire: A rather warm entry with heartwarming moments (Shireen) and romance (Jon and Ygritte), as several folks discover bath time and take the plunge. Also: smirk along with (or at?) Cersei as we sort through the tangled web of Lannister/Tyrell/Stark marriage-alliance plots.

Episode eight – Second Sons: To attend a royal wedding where no one dies, although Cersei does drop a death threat on a Tyrell in the Sept of Baelor. Foreshadowing! Bonus: Sam Tarly becomes Sam the Slayer.

Episode nine – The Rains of Castamere:Because it’s a nice day for a Red Wedding. Scream, cry and say goodbye to some sadly unsuspecting Starks. Also try not to choke up when Bran wargs Hodor for the first time, or Rickon and Osha leave. The heartbreak!

Five things to watch for in season three

The War of the Five Kings has lost one king but remains in full swing, with three of the seven kingdoms in open rebellion. Plots are in place to remove another king from the board by the end of the season, but there are so many plots, counterplots, and untrustworthy types lurking about, it’s hard to keep track. Focusing on these might help:

Calling child protection services
An awful lot of children in Westeros and Essos get mistreated – molested, murdered, sold or sacrificed (as we learn the daughter-raping Craster has done with his 99 sons, and would have done with his 100th, Gilly’s baby). Some 8,000 newborns were killed in Astapor because slave masters wanted to prove their eunuch soldiers had no sense of empathy. Other children are orphaned when their parents are killed in one or another war.

Few kids can fend for themselves – the Stark children survive primarily because they have guardians who step in and take care of them. (The Hound isn’t a bad baby sitter!) We don’t know yet what kind of parental substitutes the White Walkers are, but you’d figure they have to be better than Craster. (They at least show an interest.) No wonder Dany develops a saviour complex – there are so many children in this brutal world who desperately need saving.

Spy vs spy
Spies are everywhere. Jon Snow goes undercover with the Free Folk as a defector (and doesn’t fully fool them). Varys convinces Ros to spy on Littlefinger (or perhaps she lured him in, looking to spill some valuable info about her boss’s travel plans). Varys then tries to thwart Littlefinger by plotting with the Tyrells, but Littlefinger’s prostitute Olyvar easily seduces Loras Tyrell and reports back. Key bit of intel: Loras is set to marry . . . someone. Littlefinger concludes that the someone is Sansa and alerts the Lannisters, leading to Tywin’s strategic matchmaking of Cersei with Loras and Tyrion with Sansa, which none of them are happy about. (Littlefinger gives Ros to Joffrey, which doesn’t end well.)

Even though Jorah Mormont is no longer a spy, he’s clearly worried that new Team Dany member Barristan Selmy knows he was, and could use that fact against him. And the ultimate spymaster in all of Westeros, of course, is the Three-Eyed Raven, who recruits Jojen Reed and Bran Stark for his mysterious purposes. At least Jon, Ros, Olyvar and Jorah know the risks of their espionage: Bran has no idea what’s in store for him. (“The raven is you” does not count.)

Red Wedding RSVPs
When did the plans for the Red Wedding coalesce? The Frey alliance with the Starks was in tatters by the end of season two, but they didn’t plan it alone.

When did Tywin Lannister get in on the action? Clues come early in season three, when he embarks on a correspondence spree. (Notice that when both Tyrion and Cersei come to visit him, he is preoccupied with writing letters). Tywin’s first missives would most likely be to the Freys, who want revenge on the Starks and an end to the war in the Riverlands.

What about Roose Bolton? The first dodgy sign comes when he doesn’t tell the Starks that Ramsay has captured Theon – with the Stark position weakening, Roose probably decided to start keeping his options open. When his hunters return with Jaime Lannister (and Brienne), those options become clearer: He can alert Robb and help resolve issues with Lord Karstark, or he can alert Tywin and gain a favour from the crown. So for the second time, Roose neglects to inform the Starks about a prisoner they seek.

While Jaime and Brienne are in Bolton’s custody, Tywin starts talking about Sansa being the key to the North. It would seem Tywin is more secure with his plans to remove Robb – perhaps because he now knows the whereabouts of his son. Only after this do the Freys bring new terms to the Starks, at which point Roose decides to free Jaime. Coincidence?

Save the date
Joffrey’s nuptials won’t happen until season four, but the conspirators begin their conspiring here in season three. It takes a lot to plan a murder at a royal wedding – you have to order the flowers, the cake, the poison . . .

Early on, Olenna Tyrell questions Sansa about what Joffrey’s really like, possibly to clarify her thoughts about a course of action. And with all the Sansa-swapping schemes being bandied about, it must have also occurred to the Queen of Thorns that a swap would be beneficial for Margaery’s sake as well – her granddaughter would still be able to marry Joff’s gentler brother Tommen, who would ascend to the throne, if say, Joffrey were removed from power before consummating any marriage. That is, if the Tyrell-Lannister alliance remains intact, and if the Lannisters still need the Tyrells more than the Tyrells need the Lannisters. And so Olenna offers a few concessions to Tyrion and Tywin – offering to pay for half the royal wedding (after Tyrion objects to its cost) and agreeing to a Loras-Cersei marriage alliance, for now at least.

We don’t see Olenna interact with Littlefinger at all this season – they’re careful, these two. But Varys does tell her that Littlefinger is the most dangerous man in Westeros. Who better to help plan a regicide?

White Walker art installations
Always the artists, Mance Rayder grumbles when he finds disassembled horse corpses at the First of the First Men. (Sam also finds a man with his head in his lap.) Either the White Walkers really have a lot of time on their hands, or they’re trying to send a message. But what is it? We’ll later see some of these same spirals and geometric patterns in cave paintings and stone circles made by the Children of the Forest, which underlines the connection between the two species. Are the White Walkers’ art pieces a memory or mockery of their creators? A warning to humans? A ritual form of worship? Yelp reviews? In order to defeat them, we’ll need to understand them.

Are your kids ready for Game of Thrones?

Episodes two, three, four, six, seven, 10 – Crucifixion and torture: If you don’t share Ramsay’s taste for sadism, skip his slicing, dicing and psychosexual mutilation of Theon, mostly while the poor devil is strapped to a saltire cross. Basically, any time you see Ramsay, fast forward and explain that he breaks Theon and turns him into a grovelling slave called Reek. Done? Done.

Also potentially hard to take: the sight of the men crucified along Astapor’s Walk of Punishment. The shot comes about 30 minutes into episode three and lasts a little over two minutes, with most of the miserable victims remaining in the background.

Episode four – Twin rebellions beyond the Wall and in Essos: The Night’s Watch mutiny is sudden and brutal. (The first blow takes place around 41 minutes into the episode, and lasts two minutes.) Dany’s sack of Astapor, while empowering, is also quite violent – she incinerates a man and orders mass murder. (The incineration starts at around 51 minutes into the episode, and lasts about a minute). – New York Times