Dancing With The Stars 2019: Jennifer Zamparelli and Nicky Byrne’s zero chemistry a turn-off

TV presenter Mairéad Ronan has been crowned the Dancing with the Stars champion for 2019. Video: RTÉ 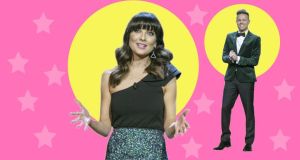 So Dancing With The Stars has foxtrotted into the sunset for another year. It has been a season of highs, lows and in-betweens (you can debate among yourselves into which category the temporary black out in episode three belonged).

What was especially striking was the degree to which the series felt like a machine-processed replica of DWTS years one and two. Once again, RTÉ and production company Shinawil put together a formulaic pick’n’ pix of celebs.

There were two name recognition sports stars (Denis Bastick of the Dublin GAA footballers and ex-rugby ace Peter Stringer of the magical see-through dress shirt), a soap veteran (Fair City’s Clelia Murphy) and dark horses who could actually dance (actor Johnny Ward and country singer Cliona Hagan, both of whom reached the final, alongside Mairéad Ronan).

There was even a Marty Morrissey 2.0 in Fred Cooke. The comedian radiated a wibbly-wobbly enthusiasm, though this never quite compensated for his less than balletic deportment. Even at his most ardent he was more swan dive than Swan Lake.

Yet three years in, is it enough for the producers to simply serve reheated morsels of what has gone before? Now that DWTS is into its stride it feels legitimate, moreover, to compare it to the original of the celebrity hoofing species, the BBC’s Strictly Come Dancing (the format of which RTÉ has licensed and reproduced down to the Satanic theme tune).

The biggest switch-up was new co-presenter Jennifer Zamparelli, replacing the departed Amanda Byram. Zamparelli was presumably hired on the strength of the comedy nous displayed on chucklesome baubles such as Republic of Telly (we should here acknowledge many licence-fee payers regard Republic Of Telly, and its spin off Bridget & Eamon, approximately as hilarious as returning to find their car clamped).

It’s proved a bumpy baptism for the experienced broadcaster. The chemistry with Nicky Byrne has had all the zing of a Westlife b-side. But perhaps it’s not you Jennifer, it’s the boy Byrne. Indeed for much of the season, the true on-screen sparkle was between Byrne and his quiff (they are obviously deeply in love and we wish them a long and happy future together).

Zamparelli was, if anything, guilty of trying too hard. Week after week her jokes landed with all the poise Fred Cooke mid-salsa. Worse yet, she seemed to have been in part engaged as straight-person to Byrne. Her sole purpose seemed at times to be reduced to feeding Byrne lines which he proceeded to mangle like Ireland being buffeted by a transatlantic storm.

At its worst, this howling absence of spark has been DWTS’s biggest turn-off.

Faring rather better, thankfully, were judges Loraine Barry, Julian Benson and Brian Redmond. Benson fell ill halfway through and was replaced for two weeks by the series’ creative director Darren Bennett. The Englishman was knowledgeable and personal – as were the returning Benson and his fellow adjudicators.

In terms of production values, the RTÉ show is always going to come off second best to what Irish viewers can watch on the BBC. Strictly has a live band, a-lister musical guests and is shot in storied Elstree Studios in London.

Dancing With The Stars, by contrast, features pre-recorded music (with the exception of orchestral week) and guest appearances from local acts with whom much of the audience will be madly unfamiliar. Wild Youth may, for instance, have their constituency but it isn’t people who sit down to RTÉ One on Sunday nights. Oh, and it’s filmed on an industrial estate in Bray, Co Wicklow.

Nonetheless, the season has been freighted with genuine tension. Fred Cooke set the internet ablaze as the judges opted to spare him ahead of Demi Isaac Oviawe despite his slip during their elimination dance-off. Heart-strings were meanwhile pulled as Johnny Ward, formerly of Love/Hate, performed the day after his father had passed away. With tears glimmering, he explained he was honouring his dad’s wishes. You can’t manufacture moments such as that. Ward’s sincerity – and Nicky Byrne’s matey amiability interviewing him, it should be acknowledged – provided the year’s stand-out lump in throat moment.

Audiences continue to lap it up too. Consolidated viewing figures (which include those watching on catchup) averaged 536,000, in line, says RTÉ, with the 552,000 tuning in 12 months previously. Online viewership was up three per cent and weekly audience share held firm at 36 per cent. Roll your eyes, shake your head, utter a silent prayer for humanity – there’s no denying Dancing With The Stars remains a soaraway smash.

But it would be foolish of RTÉ to be complacent. Looking to 2020, the honking dearth of chemistry between the presenters will have to be addressed.

And the budget should really be stretched far enough to hire a joke writer. Most of the gags in this series lacked setup and punchline and instead rated as what viewers recognise as “RTÉ funny” – a sort of fake news of comedy. Otherwise, though, this was a story of steady as she goes. Dancing With The Stars is nobody’s idea of high-class entertainment. As a guilty pleasure, it delivered with a bow and a wink.

Film-maker Pedro Costa: ‘There is no Beckett or Joyce in cinema’
6

Living with Prince: ‘I think it’s time you got birth control’
8